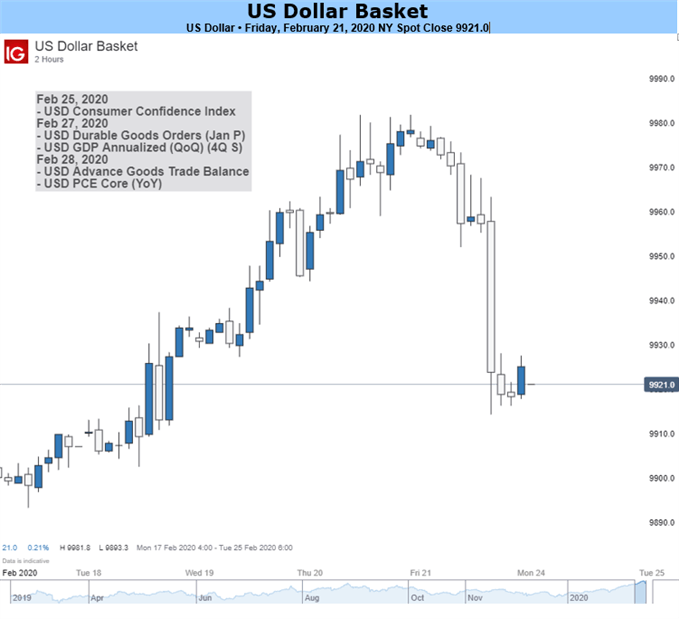 US Dollar Price, Analysis and Charts

The King dollar continues to march forward, making fresh multi-year highs against a range of other major currencies including the Euro, the Japanese Yen and the Australian dollar. A combination of a robust economy – despite Friday’s lowly PMIs – and the worrying spread of the coronavirus, has left investors with little choice but to keep on buying the USD in order to shift their risk-profile. Gold and the Swiss Franc continue to benefit from the ongoing market move to risk-off but neither can offer the breath or depth of the US dollar.

The USD rally has also been helped by weakness in the other majors with the Euro-Zone still fighting to avoid economic stagnation, Japan becoming more vulnerable to weak economic data, while the Australian economy may need further monetary stimulus to fight off the effects of the coronavirus on local and global economic trade.

The latest set of US PMIs released on Friday do suggest that the US economy is not fully immune to the global economic downturn with both the services and the composite reading falling sharply, suggesting economic contraction.

Next week’s data may allay fears that the US dollar has peaked with US consumer confidence, core PCE – the Fed’s favored measure of inflation – and the second look at Q4 GDP all released. While data will in some part steer the fortunes of the US dollar, the main driver of price action will remain the ongoing spread of the deadly Chinese flu. There are nearly 77,000 confirmed cases of the virus with 2,251 fatalities. In addition, there are reports that China will change their counting methods again, bringing about a sharp rise in the number of infections.

Friday’s weak US PMIs prompted a sharp fall in the value of the US dollar, but the chart remains positive and likely to move higher slowly higher next week. There is a ‘golden cross’ forming – 50-dma moving up through the 200-dma – and this is likely to re-set the trend higher.

What is your view on the US Dollar – bullish or bearish?? You can let us know via the form at the end of this piece or you can contact the author via Twitter @nickcawley1.