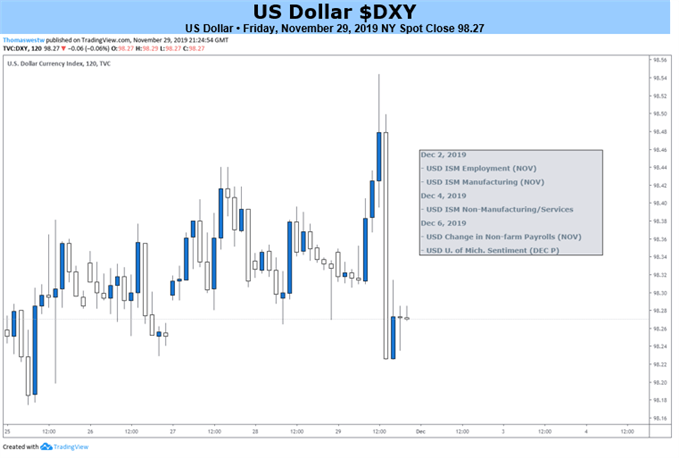 Get our free guide to help build confidence in your US Dollar trading strategy !

The US Dollar has idled in a narrow range since mid-October. That follows a pullback from the early-September swing high, which appears to reflect ebbing haven demand amid swelling hopes for a US-China trade deal and a seemingly reduced risk of a “no-deal” Brexit outcome.

The reversal proved to be relatively short-lived as the markets’ rosier disposition pushed 2020 Fed rate policy expectations away from dovish extremes. That stemmed USD selling, reminding investors that it still offers a meaningful yield premium of about 150 basis points on average relative to its top counterparts.

Subsequent standstill appears to reflect uncertainty about whether this more positive narrative has true basis. A US-China trade accord remains nonexistent despite soundbites from Washington and Beijing claiming it is nearly complete, and Brexit is an enigma until the UK general election on December 12.

The week ahead offers some notable data points to show where the global business cycle stands against this backdrop. ISM manufacturing- and service-sector surveys, November’s jobs report and the University of Michigan’s closely-watched consumer confidence gauge are all due to cross the wires.

The economic calendar will fade from view if the US and China actually sign – rather than just talk about – a now almost mythical “phase 1” trade deal. That is meant to set the stage for a more comprehensive realignment of their commercial relationship down the road.

The markets could cheer the outcome at the onset, which might lead the US Dollar lower as more haven-seeking exposure is unwound. That may be short-lived however as yield-based considerations resurface once again, as we have already seen over recent months.

The limited scope of any “phase 1” accord may well be priced in already however. A kind of “buy the rumor, sell the fact” response may thus be in the cards. That would see sentiment crumble as the shallow effort leaves top issues (like intellectual property rights enforcement) unresolved indefinitely.

Rolling back trade barriers and rebuilding supply chains probably can’t happen on this flimsy basis, leaving markets with about as challenging an environment as before any deal is signed. Soft US data outcomes may reinforce this point, warning that the downturn in global growth will not be easily reversed.

The US Dollar has scope to return to the offensive against this backdrop. Its unrivaled liquidity will once again command a premium if sentiment sours market-wide, driving divestment from riskier cycle-sensitive assets and stoking demand for defensive alternatives.