Weekly US Dollar Forecast: Front-Loaded Week Due to Thanksgiving 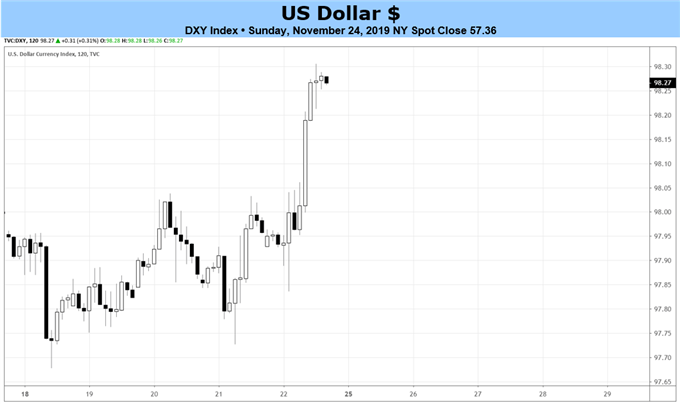 The US Dollar had a modestly positive week as the calendar turned through the middle of November, with the greenback posting gains versus all but two of its major counterparts. Only USD/JPY (-0.13%) and NZD/USD (0.09%) weathered what was an otherwise strong performance by the DXY Index over the final two days of trading. USD/CHF was the best performing USD-pair, gaining 0.76%, following by USD/CAD, which added 0.59%.

Depending upon the time of day, day of the week, and whether Mercury is in retrograde, you’ll get a different sense of progress on the US-China trade war front. The Phase 1 deal was expected to be wrapped up before the end of the year, but news reports over the past week or so suggest that it may not come to fruition.

On the other hand, with US President Donald Trump stalling on signing a bill passed by the US Congress effectively condemning the Chinese government for their treatment of Hong Kong, it seems that the US president’s desire to get a trade deal done is trumping all other factors.

US Economic Calendar Thin Ahead of Thanksgiving

It’s a holiday-shortened week for the US Dollar, with Thanksgiving on Thursday and Black Friday’s half-day for financial markets thereafter. As such, federal reporting agencies are closed at the end of the week, and all of the week’s economic data – as well as Federal Reserve policymakers’ speeches – are front-loaded in the first three days of the week.

There are three data releases that are worth paying attention to in the run-up to the Thanksgiving holiday. On Tuesday, speaking of the US-China trade war, the October US advanced goods trade balance will be released. The report has typically drawn the ire of US President Trump, so traders shouldn’t be surprised if US-China trade war-related tweets hit the news wires thereafter.

On Wednesday, the final Q3’19 US GDP report will be released alongside the October US durable goods orders report. With respect to the US GDP data, the economy appears to have entered a period of deceleration, as the final reading is forecast to show a 1.9% annualized growth rate. Forward looking estimates aren’t too optimistic either. 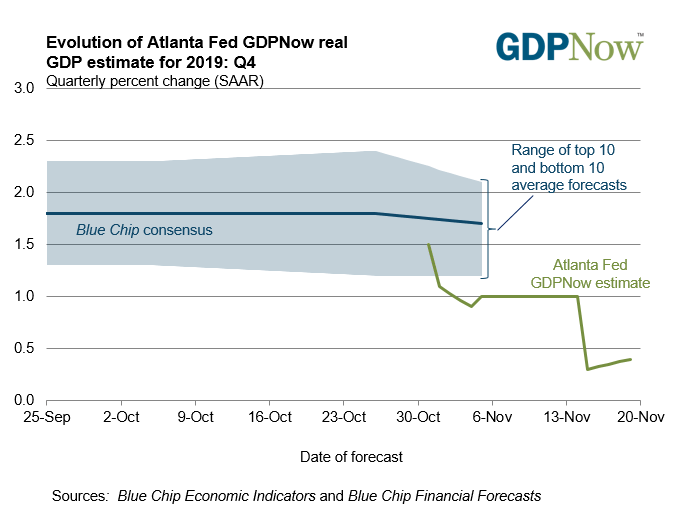 Based on the data received thus far about Q4’19, the Atlanta Fed GDPNow forecast is looking for growth at 0.4% annualized. The next update to the Q4’19 forecast will be released on Wednesday, November 27 following the October US durable goods orders report. It appears that more weakness in the Q4’19 US GDP should be anticipated.

Durable goods are items with lifespans of three-years or longer – from refrigerators and washing machines to cars and airplanes. These items typically require greater capital investment or financing to secure, meaning that traders can use the report as a proxy for business’ and consumers’ financial confidence and health. Approximately 70% of GDP is accounted for by the spending habits of businesses and consumers. As such, the durable goods orders reportmake for an important barometer of the US economy.

The preliminary October print is expected to show a loss of -0.7% m/m after the 1.2% m/m contraction in September.

Rates markets have continued to evolve in a manner that’s been supportive of the US Dollar – even as uncertainty around the US-China trade war Phase 1 talks swirls and the US economy continues to show signs of deceleration – both in actual data and expectations. Regardless, after Fed Chair Jerome Powell effectively declared an end to the Fed’s mid-cycle adjustment in interest rates, Fed funds futures are now foreseeing a long period where interest rates will stay on hold. 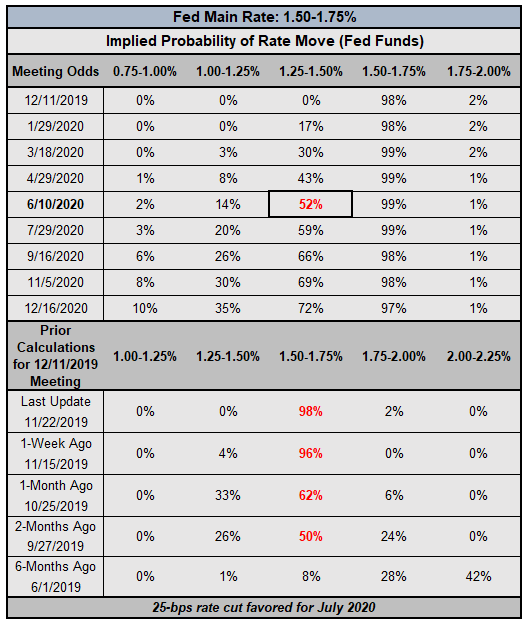 According to Fed funds futures, market participants are currently discounting less than a 50% chance of no policy change in rates through April 2020. June 2020 is the first month that sees an implied probability greater than 50%, while a full rate cut is discounted by September 2020 (the current effective Fed rate is 1.55%; the forward rate for September 2020 is 1.30%, or -25-bps lower). 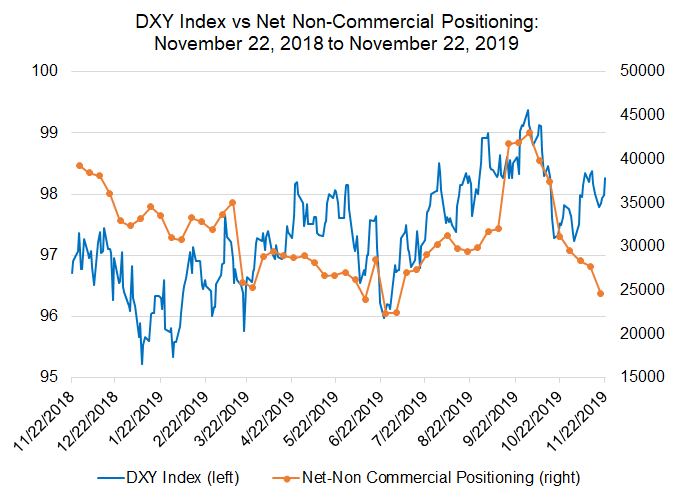 Finally, looking at positioning, according to the CFTC’s COT for the week ended November 22, speculators decreased their net-long US Dollar positions to 24.6K contracts, down from the 27.8K net-long contracts held in the week prior.

Net-long US Dollar positioning has dropped meaningfully in recent weeks, down by 43% since the 43K contracts held during the week ended October 1; during this time, the DXY Index only dropped by -0.58%.

Such resiliency in the face of a liquidating long futures market bodes well for the US Dollar’s upside potential on a medium-term basis.