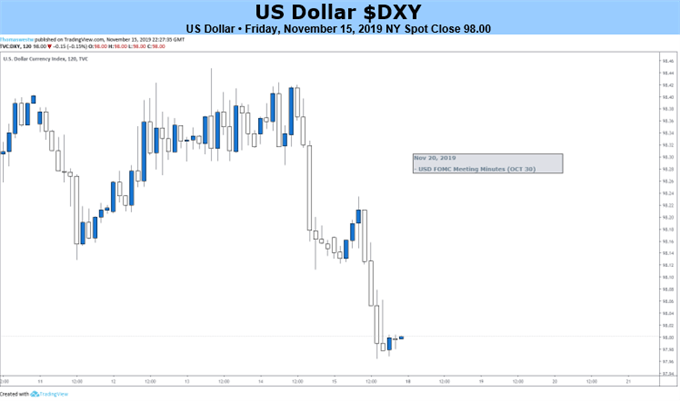 The US Dollar largely underperformed against its major counterparts this past week. Most of its decline occurred during the end of last week on two fundamental developments. The first was testimony from Fed Chair Jerome Powell. Despite Mr Powell offering a favorable outlook on the economy, which can at times warrant the case for tightening, he maintained that current policy is appropriate. Local bond yields fell.

Then, White House Economic Adviser Larry Kudlow helped fuel speculation of a US-China trade deal, sending the S&P 500 and Dow Jones Industrial Average to close at record highs. Risk appetite dented the need for safe-haven assets, such as the highly-liquid US Dollar. Meanwhile 2020 Fed rate cut bets saw a cautious rise. Expectations are evenly split for a 25bp reduction by June as of this past Friday.

The local economic docket notably cools in the week ahead, with key event risk being the FOMC minutes from the October monetary policy announcement. That will cross the wires on Wednesday. There the US Dollar could be at risk if the report reiterates familiar language about how current benchmark lending rates are appropriate despite an improving outlook on the economy.

It may rise against the Euro on the ECB account of the October policy meeting. That will be released the next day and may reveal further details into the central bank’s reintroduction of quantitative easing that began this month. Keep a close eye for what could be cautious commentary about the economic outlook from ECB Vice President Luis de Guindos and Executive Board Member Nathan Lane on Monday.

On Wednesday, USD/CAD volatility may be elevated by incoming Canadian CPI. While data is still tending to outperform relative to expectations in Canada, this has been by a shrinking margin. The US Dollar may rise against the Canadian Dollar if softer-than-expected CPI data underpins concerns from the BoC about the economic outlook. It remains one of the major central banks that has avoided cutting rates this year.

In aggregate, the US Dollar could see buying pressure rekindle should US-China trade talks head in the wrong direction despite rosy sentiment out of the former. US President Donald Trump has shown reluctance about unwinding tariffs against his Chinese counterpart Xi Jinping. A sudden repricing in trade deal bets could lead to aggressive market volatility and drive demand into the world’s reserve currency.

US Dollar Versus Risk Trends 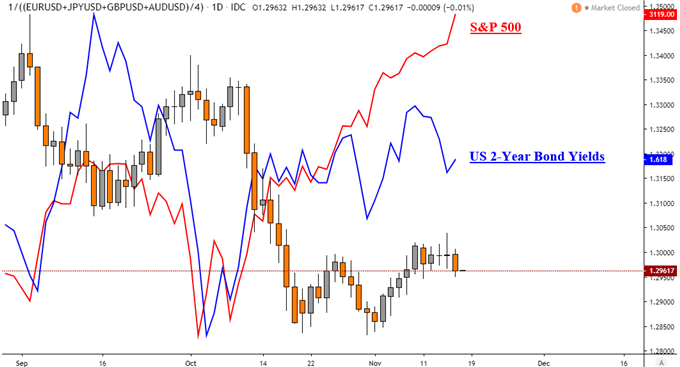