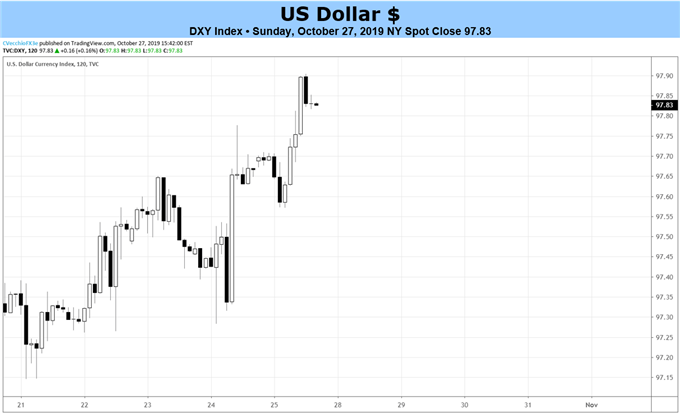 Although October has been unkind to the US Dollar, the past week offered a reprieve against most of the major currencies, with USD/CAD as the sole losing USD-pair, falling by -0.53%. Elsewhere, gains were modest. USD/JPY was able to add 0.2%, while AUD/USD and NZD/USD shed -0.48% and -0.52%, respectively.

With concerns over a no-deal, hard Brexit percolating as EU and UK officials jockey over a Brexit extension, the European currencies rounded out the underperformers versus the US Dollar last week. EUR/USD fell by -0.78%, USD/CHF gained 0.93%, and GBP/USD depreciated by -1.21%.

US Economic Calendar Heavy Over the Coming Days

With the US-China trade war on the path to de-escalation and a Brexit extension looking likely, the US economic calendar will compete with evolving overarching macroeconomic themes for influence over the US Dollar. As October ends and the calendar opens for November, there are several economic data releases that are classified as ‘high’ event risk that will drive volatility across USD-pairs.

Ahead of the two major releases this week on the forex economic calendar – the October Fed meeting and the September US jobs report (nonfarm payrolls), it’s important to calibrate expectations around the current US growth picture. Overall, the US economy has been disappointing market participants, with the Citi Economic Surprise Index for the US eroding from 44.3 to 4.9 over the past four weeks. 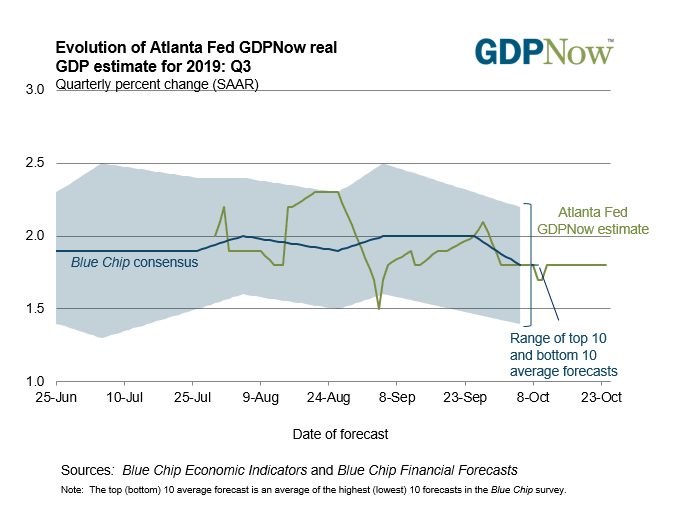 Based on the data received thus far about Q3’19, the Atlanta Fed GDPNow forecast is looking for growth at 1.8% (the final update to the Q3’19 forecast will be released on Monday, October 28. On Tuesday, October 29, initial reporting for Q4’19 US GDP will begin). It’s not a surprise, then, that market pricing for the forthcoming October Fed meeting are dovish, and that consensus forecasts for the September US jobs report are so mediocre.

The Federal Reserve has been front-and-center in terms of rate cut expectations driving market sentiment, largely due to the US-China trade war. But now that negotiations are moving in the right direction again, expectations for heavy-handed monetary stimulus have been reduced. Yet concerns about US growth remain as US GDP tracks below 2% - even as the US runs its largest fiscal deficit in non-recession, non-war times. Instead of three 25-bps rate cuts being discounted over the next year, there are now only two, but they are front-loaded. 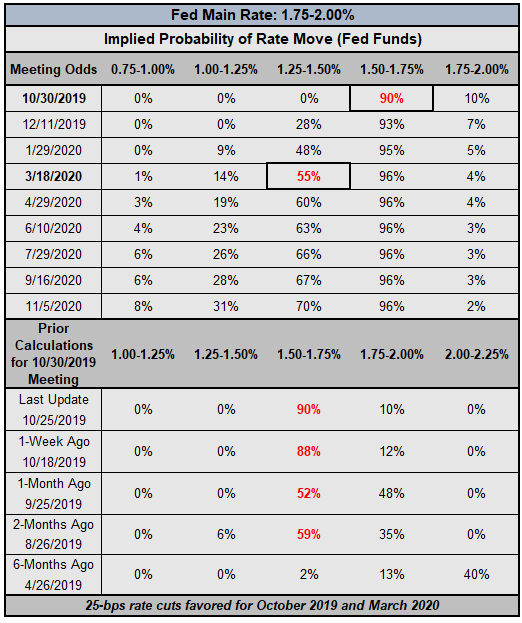 According to overnight index swaps, market participants are currently discounting a 90% chance of no policy change at the October Fed meeting, up from 88% this time last week. Rate cut odds have risen meaningfully in recent months, having sat at 52% one-month ago. Additionally, there is now a 48% chance of a 25-bps rate cut at the January 2020 Fed meeting; March 2020 is now the most likely month for the next rate cut (55%).

September US Nonfarm Payrolls Cap Off the Week

The US labor market has long been a pillar of strength for the US economy, butexpectations are that the economy only added jobs at a modest pace in September. After the disappointing reading of 136K in August, Bloomberg News’ consensus forecast is looking for 88K jobs to have been added in September. Accordingly, forecasts point to the unemployment rate (U3)edging higher from 3.5% to 3.6%.

According to the Atlanta Fed Jobs Growth Calculator, the economy only needs +106.5K jobs growth per month over the next 12-months to sustain said unemployment rate at its current 3.5% level.As it were, a mediocreSeptember US jobs report could give traders a reason to keep Fed rate cut expectations front-loaded through early-2020. 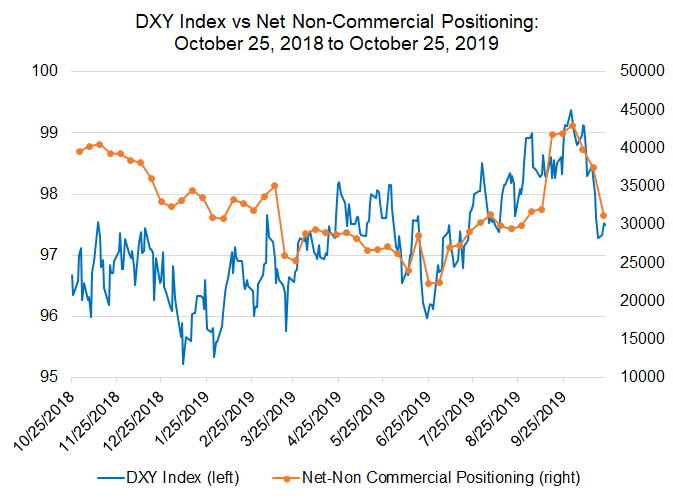 Finally, looking at positioning, according to the CFTC’s COT for the week ended October 22, speculators decreased their net-long US Dollar positions to 31.2K contracts, down from the 37.4K net-long contracts held in the week prior. Net-long US Dollar positioning has dropped meaningfully in recent weeks, down by 27% since the 43K contracts held during the week ended October 1; during this time, the DXY Index dropped by -2%.