Dollar 4Q Forecast: US Dollar May Require Systemic Shock to Secure a Direction

This is just a preview of the 4Q US Dollar trading guide. Download the full report – including both fundamental and technical analysis – for free here.

While there are literally thousands of economic matters buffeting the world's most liquid currency, there are certain considerations that have commanded the Dollar’s reins more readily these past months - and will likely continue to do so moving forward.

While trade wars have been a point of contention as to whether they can confer some measure of benefit or if they are clear detriment to the United States, data and sentiment surveys are starting to show clear strain on the economy. That in turn raises the pressure to over-taxed girders to the past decade of expansion: namely the support of the Federal Reserve. Yet, what if the central bank moves too slowly, refuses to act or the market simply deems it incapable of holding back the tides of change? 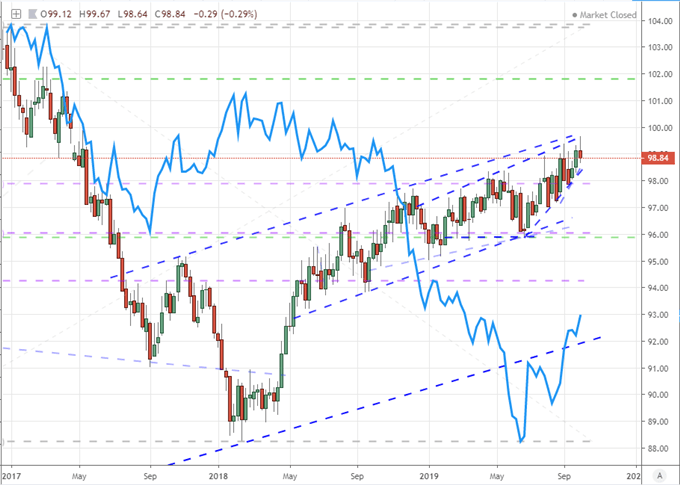 A slide down the monetary policy scale and/or economic struggle could readily pose a striking motivation for the Dollar relative to global counterparts. While the US central bank has thus far shown little enthusiasm to act in an effort to afford a cheaper currency and thereby growth through trade, there are forces that are pushing aggressively for just such a solution. US President Donald Trump made no effort to hide this clear interest through the past quarter.

Yet, while the Fed may not be willing to strong arm the currency, we should not write off the possibility that the White House could attempt a currency intervention as a bid to buy more time. In an increasingly competitive world and with elections starting to role forward, unorthodox options may look more appealing. If indeed this line is followed, the implications seem acutely straightforward for the Greenback. Is there any meaningful potential benefit to the currency in this array of motivators, or does the future skew more thoroughly bearish?

Download the full report – including both fundamental and technical analysis – for free here.