The US Dollar dropped sharply this past week with the DXY Index sinking roughly 1%. USD weakness was primarily driven by the market pricing in greater probabilities that the Federal Reserve will cut rates again at the next FOMC meeting following a turn for the worse in the US-China trade war with Trump’s threat of hiking tariffs further. Even though Chair Powell talked down the July Fed rate cut as a “mid-cycle adjustment” in the follow-up press conference, the FOMC statement noted that the central bank “will act as appropriate to sustain the expansion.” 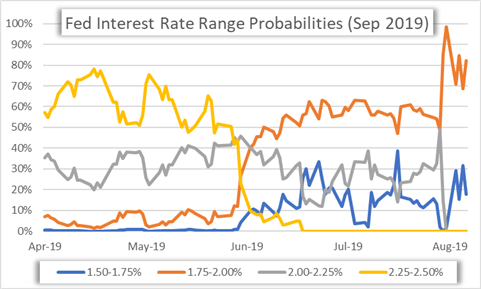 That said, the market’s priced expectation for the Fed to loosen monetary policy once more will largely be driven by US-China trade war developments in the coming days. For a possible barometer, currency traders could watch USDCNH to gauge US-China trade war escalation which would likely drag down the greenback more broadly relative to the Euro, or anti-risk currencies like the Japanese Yen and Swiss Franc. Additionally, the release of closely watched economic indicators next week have potential to spark a reaction in Fed rate cut bets and drive the direction of the US Dollar as well. 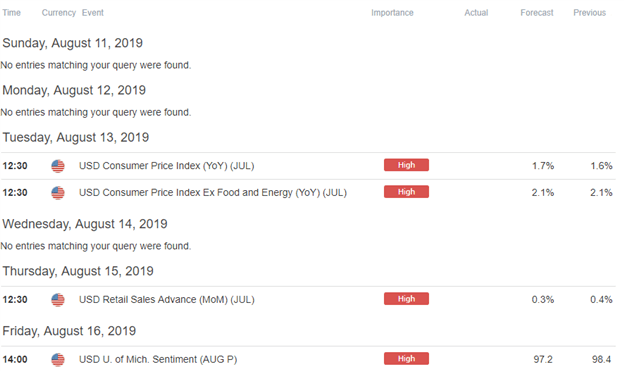 Using the DailyFX Economic Calendar, we can filter out some of the noise and hone in on high-impact event risk that has potential strongarm price action. Looking to next week, currency traders might anticipate volatility around US inflation data expected to cross the wires Tuesday at 12:30 GMT in addition to retail sales on Thursday at 12:30 GMT and consumer sentiment on Friday at 14:00 GMT.

Reductions in the target federal funds rate have long been priced in by traders, but the magnitude and longevity of the interest rate cuts remains ambiguous. Yet, rate cuts currently priced in likely won’t respond materially to better-than-expected US economic metrics whereas disappointing data prints could accelerate the odds of an aggressive Fed rate cut in the near future. 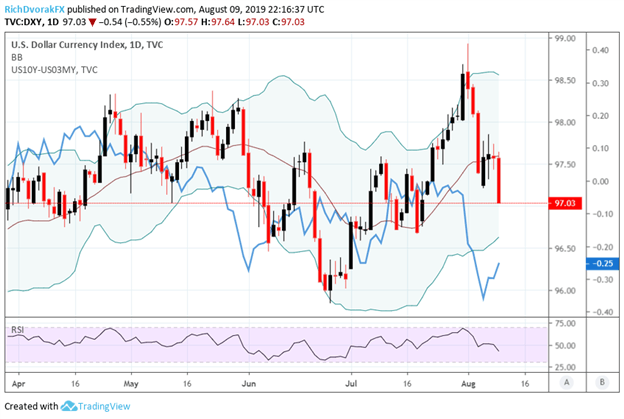 In light of this, the relative steepening or flattening of the US Treasury yield curve – measured via 3m10s yield spread (shown above in blue) – has potential to serve as a bellwether to where the US Dollar heads next.

Also, USD selling pressure could be sparked if the Trump Administration reignites pressure on the Federal Reserve to make deep interest rate cuts aiming to weaken the greenback thus making the currency and domestic exports more competitive. However, potential USD downside in response to this development, if manifested, could prove to be short-lived if the Fed shies away from moving aggressively as to not jeopardize credibility or the US Dollar as the world’s reserve currency.