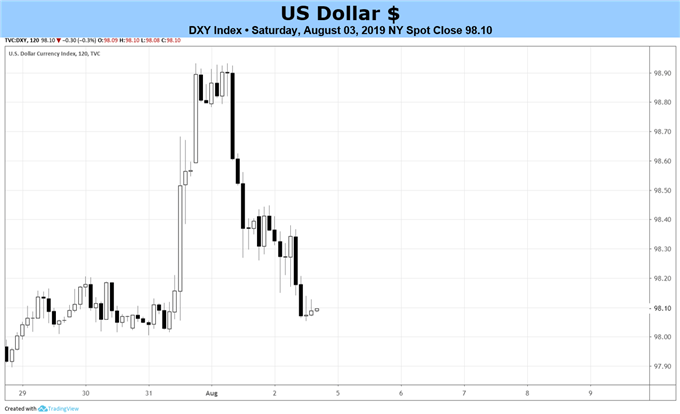 The first month of Q3’19 is in the books, and the start of August has not been good for the US Dollar. Volatile price action around the July Fed meeting can’t be blamed on Fed Chair Jerome Powell and the FOMC alone; US President Donald Trump, who has been hammering Fed Chair Powell to cut interest rates, may very well have created a situation where the FOMC will have no choice but to comply.

In turn, the majority of gains the US Dollar (via the DXY Index) accumulated around the July Fed meeting were lost by market close on Friday. The weekly performance of the safe haven currencies underscores the growing concern of the global economy slowing amid the trade war between the world’s two largest economies. USDJPY was the worst performing USD-pair, losing -1.56% over the week, while USDCHF followed suit, dropping by -1.10%.

Otherwise, the US Dollar was able to appreciate versus its other major counterparts as risk appetite eroded. The commodity currency trio were among the worst performers, with USDCAD rallying by 0.31%, NZDUSD falling by -1.45%, and AUDUSD dropping by -1.60%. But with concerns over a no deal, hard Brexit raging thanks to remarks by new UK Prime Minister Boris Johnson, GBPUSD was the worst performing USD-pair, losing -1.80%.

After the July Fed meeting on Wednesday, the US trade delegation canceled negotiations with their Chinese counterparts, and on Thursday the US-China trade war took a turn for the worse with US President Trump’s surprise announcement for an additional 10% tariff on $300 billion of imported goods.

In turn, while the US Dollar initially benefited by a less dovish Fed than some market participants were expecting, the developments immediately following the July Fed meeting now has traders convinced that the Fed will continue down the dovish policy path for the foreseeable future. 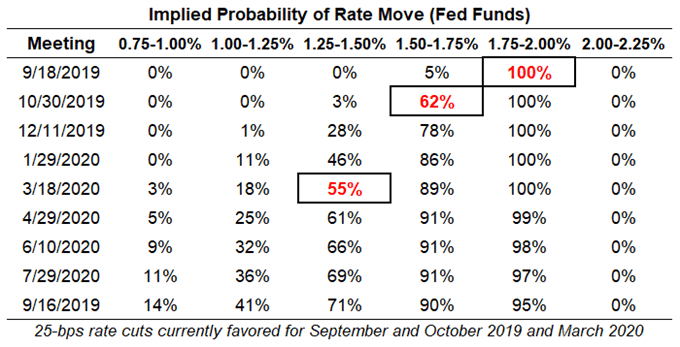 Even as the Federal Reserve opted for only a 25-bps rate cut, the tectonic shifts in the US-China trade war have raised expectations of another rate cut at the next policy meeting: Fed funds are discounting a 100% chance of a cut in September. There is a 62% chance of a third 25-bps rate cut (totaling 75-bps in 2019) coming by October, and a 78% chance by the December Fed meeting.

The last time that USDCNH rallied by more than 1% in a week was in mid-May, when US President Trump announced he would be escalating the US-China trade war with fresh tariffs at the start of June (which he did). As such, it still holds that the 7.00 barrier of resistance in USDCNH prices may be the most important level for currency markets.

Traders seeking clarity on Fed policy will have the opportunity to listen to three different policymakers speak over the coming days. The first speaker, Fed Governor Lael Brainard, will probably have the most limited impact on FX markets, given that the topic of discussion on Monday is “payment systems” rather than a discussion around the US economy.

But the other two speakers over the course of the week are likely to produce comments that provoke a reaction in the US Dollar. On Tuesday, St. Louis Fed President James Bullard will speak to the national Press Club in Washington, D.C. about the US economy. On Wednesday, Chicago Fed President Charles Evans will host a discussion over breakfast about the state of the economy; historically, Evans has been one of the more dovish FOMC members, so his comments may draw increased scrutiny now that the US-China trade war has taken a turn for the worse.

US Economic Calendar is Light in the Week Ahead

In the week after the July Fed meeting and the July US nonfarm payroll report release, there’s not much by way of ‘high’ rated event risk that will drive volatility. But with the US-China trade war escalating again, the news wire is likely to be the most potent source of risk – particularly if concerns about global growth balloon. 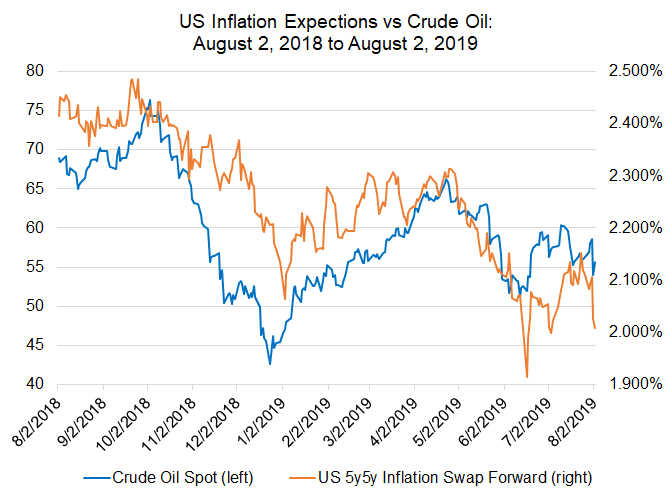 The drop in oil prices and US inflation expectations runs counter to the momentum in recent US economic data – which further underscores the notion that global growth concerns (not US-centric growth concerns) are driving sentiment across markets.

Overall, the US economy has been on better footing of recent, at least better than analysts have expected, with the Citi Economic Surprise Index for the US improving from -58.5 to -35.1 over the past four weeks. Yet the stretch of US economic data beating analysts’ expectations may be over. Take a look at the July US jobs report, for example: the actual reading came within 1% of the estimate, something that has not happened at any other point in the past 10 years.

The key takeaway here is not that this is a unique occurrence per se, but that US economic data is no longer beating expectations; analysts have adjusted their mindsets and are now more accurately tracking the state of the US economy. To this end, we may see the period of US economic data outperformance – surprising analysts’ expectations to the topside – come to an end. 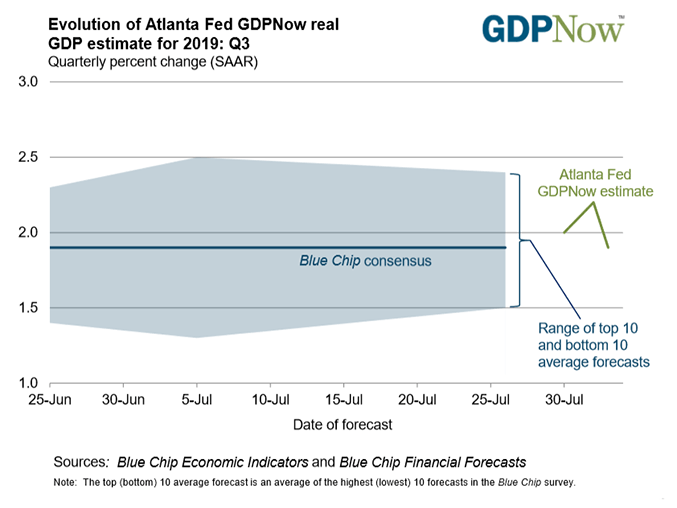 Based on the data received thus far about Q3’19, the Atlanta Fed GDPNow forecast is looking for growth at 1.9%. The next update to the Q3’19 forecast will be released after Thursday’s US wholesale trade report. 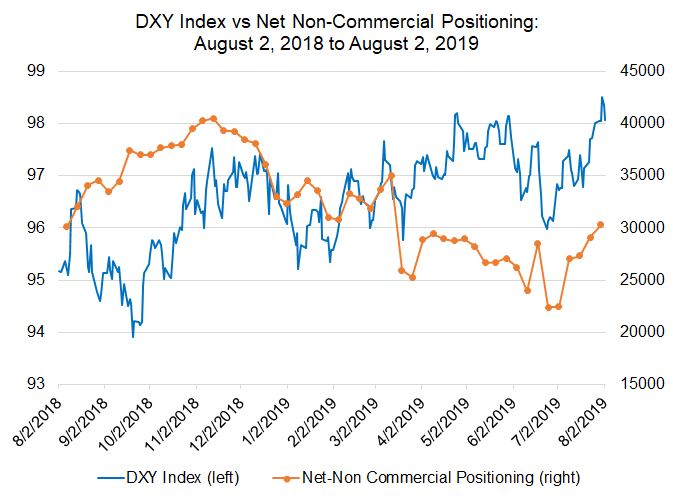 Finally, looking at positioning, according to the CFTC’s COT for the week ended July 30, speculators increased their net-long US Dollar positions to 30.3K contracts, up from the 29.1K net-long contracts held in the week prior. Net-long US Dollar positioning has increased meaningfully in recent weeks, up by 35% since the 22.4K contracts held during the week ended July 2.