US Dollar Seems to be Biased Upward on FOMC Rate Decision 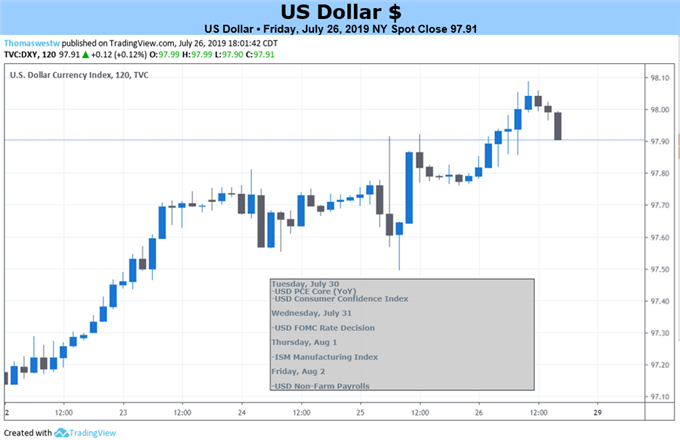 See the latest US Dollar technical and fundamental forecast to find out what will drive prices in Q3!

The US Dollar marched steadily higher last week, tracking a shift away from dovish extremes on rate futures-implied Fed monetary policy expectations. The measured rise was only briefly interrupted by event-driven volatility – like the seesaw swings immediately after the ECB rate decision – but the conviction behind it never appeared to waver.

Pre-positioning ahead of next week’s fateful FOMC monetary policy announcement probably explains such purposeful recovery. The markets appeared to have run out of room to price in an ever-more accommodative Fed policy outcomes. That made for asymmetrically high risk of a less dovish central bank than asset price levels presumed. Some portfolio rebalancing was apparently in order.

As it stands, the markets put the probability of a 25bps rate cut at 83 percent, while the chance of a 50bps reduction is at 17 percent. Tellingly, that leaves no room for an on-hold scenario yet clearly leans in favor of the smaller adjustment. A survey of recent economic data as well as commentary from Fed officials seems to support just such a result.

This likely means that the announcement’s market-moving potential will come from the accompanying statement as well as the follow-on press conference with Chair Powell rather than the rate change itself. Traders will use the tone of the rhetoric in both for guidance on whether further stimulus expansion is on the menu in the near term.

For their part, investors see the likelihood of further easing before year-end at a commanding 90 percent. A relatively even chance is being assigned to 50bps or 75bps of additional easing (34.4 and 37.9 percent, respectively). Coupled with the end of quantitative tightening – the Fed’s balance sheet reduction scheme – this amounts to expectations of a rather dramatic policy shift in a very short time span.

Once again, this seems to make the risk of a less-dovish outcome greater than the alternative. By extension, this means that the likelihood of a stronger US Dollar in the announcement’s aftermath is greater than that of a weaker one. Follow-on ISM and payrolls data may fractionally alter the weekly result one way or the other, but the Fed will probably have the defining say on where prices are headed.