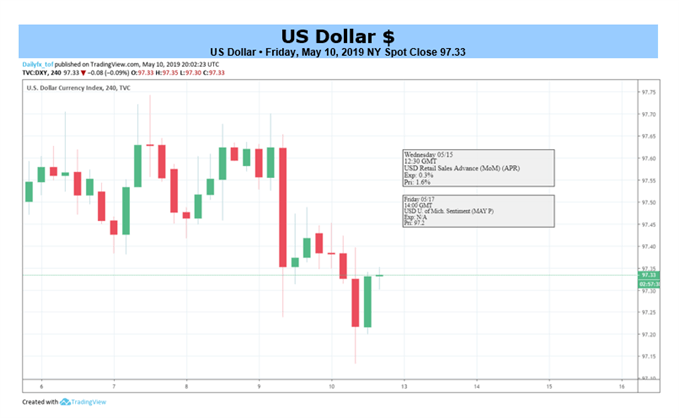 The US Dollar traded sideways during a volatile week for financial markets. The VIX ‘fear gauge’ broke higher to levels not seen since the beginning of this year as US-China trade war fears inspired risk aversion, weighing against the S&P 500. While boosting demand for anti-risk currencies, such as the Japanese Yen, the highly liquid US Dollar found itself stuck between that and falling US government bond yields.

As a reminder, the Fed struck a more neutral tone at its latest monetary policy announcement. But that was enough to send USD rallying as a less-dovish Federal Reserve spooked financial markets. The central bank reiterated the external risks to their outlook, and trade wars are a big concern. Thus, increased dovish bets worked to subdue what could have been a more optimistic week for the Greenback.

Looking for a technical perspective on the USD? Check out the Weekly USD Technical Forecast.

Despite the collapse in Fed rate hike bets this year, the Greenback has held up remarkably well. As such, disappointment in retail sales data and University of Michigan sentiment this week probably won’t be enough to sustain weakness in the Greenback. According to the US Citi Economic Surprise Index, outcomes have still been tending to disappoint relative to expectations as of late. Friday’s headline US CPI report was the latest example of softer-than-expected data.

Countering these disappointments could be a slew of familiar commentary from various regional Fed president: New York President John Williams, Kansas City President Esther George and Richmond President Thomas Barkin are all on the docket. If they reiterate the central bank’s relatively neutral stance, cooling rate cut bets, the US Dollar could find support. Though, if they bring up concerns over higher tariffs, given recent developments in Washington, the Greenback could weaken depending on if stock markets embrace the potential of lower rates.

Key US Data and Fed Speak

US Auto Tariffs, Eurozone Economic Data and the Euro

Turning our attention outwards, and with US-China trade talks fresh in our minds, May 18 marks decision day for President Donald Trump to choose whether or not to impose auto tariffs on national security grounds. As a reminder, back in February the US Commerce Department submitted findings of its Section 232 investigation into this matter, starting a 3-month period for Mr Trump to make his move.

Newswires point out that automakers are anticipating a further 6-month delayed until a decision is made. But, given the unpredictability of the administration, anything is possible, and it carries direct implications for the US Dollar. While another delay may be possible, the White House may put pressure on Europe regarding this matter, as it did with China recently, risking fueling market pessimism as the S&P 500 sinks. That may bring with it upside potential for USD.

A downside risk for the Greenback, however, may come from a couple of important European economic data. Compared to the US, data has been tending to surprise relatively better across the Atlantic as of late. If this is the case in German and Eurozone first quarter GDP data, strength in the Euro could subdue the US Dollar. But it will take more consistency to fuel a trend. On balance, more congestion could be ahead for the world’s most liquid currency.

US vs. European Economic Data Outcomes 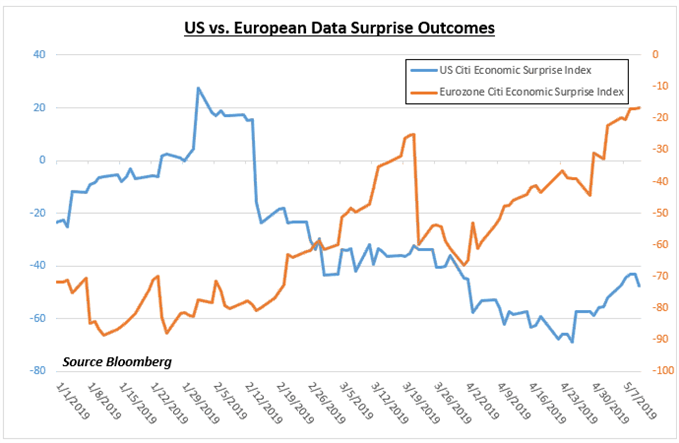