US Dollar May Find Support as Global Outlook Worries Mount 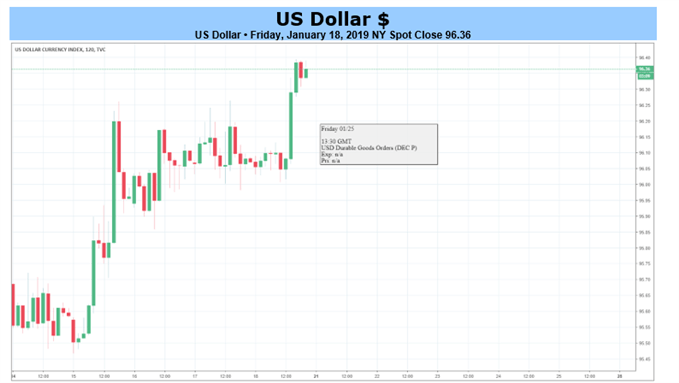 US Dollar price action has mostly reflected broad-based sentiment trends rather than homegrown fundamentals since November. The currency has been remarkably resilient despite the collapse in Fed rate hike bets.It hit a 20-month high amid a vicious late-2018 market rout before pulling back as risk appetite steadied. That speaks to a strong anti-risk appeal, which is likely rooted in USD’s unrivaled liquidity.

The Fed has been tinkering with its messaging in the meanwhile, dispending with the kind of longer-term guidance that defined policy in the aftermath of the Great Recession and pivoting to a nimbler, data-dependent approach. The markets initially saw the shift as dovish – small wonder that, considering the prior regime’s hawkish bias – but seemed to finally on-board the central bank’s intent ahead of last week’s trade.

While that might have set the stage for greater directional clarity, this was not to be as the US government shutdown derailed the release of critical pieces of economic data that ought to have informed policy speculation. What did arrive from private-sector sources looked ominous. The University of Michigan said its consumer confidence gauge unexpected dropped to a 26-month low in January.

With the US government seemingly no closer to resuming key statistical reporting, the week ahead will probably keep the spotlight on macro-level forces. Monday’s release of Chinese GDP data as well as an updated set of economic forecasts from the IMF will inform worries about a global slowdown. Thursday’s Eurozone PMI surveys will expand investors’ view of the global business cycle further.

If data out of China and the Euro area echo deepening disappointment relative to consensus forecasts over recent months while the IMF update mirrors an analogous release from the World Bank earlier this month, the cumulative message will be worrying. That might trigger another round of broad-based liquidation across financial markets, lifting the Greenback on the back of haven-seeking capital flows.

Soundbites emerging from the annual World Economic Forum gathering in Davos, Switzerland may likewise prove to be market-moving. The policy and financial market bigwigs in attendance will offer a slew of opinions on the state of the global economy, the various macro forces in play, and the outlook going forward. If the overall tone appears to have darkened, anti-risk moves across the markets may be amplified.

A breakthrough in US-China trade war negotiations might offer something of a reprieve. Markets cheered Friday amid reports that Beijing has offered their counterparts in Washington DC to boost imports of US goods such that the bilateral trade deficit is closed over six years. Sentiment may find a lifeline if there is meaningful progress along this track next week.

This need not be USD-negative. Indeed, the benchmark unit rose alongside stock prices and bond yields while the priced-in rate hike outlook implied in Fed Funds futures steepened as Chinese officials’ overture made the rounds. This ability to deftly switch from a haven- to a yield-based appeal implies that the Dollar may gain ground even if risk appetite returns in earnest.