US Dollar Aims Higher on Liquidity Appeal Amid Market Rout 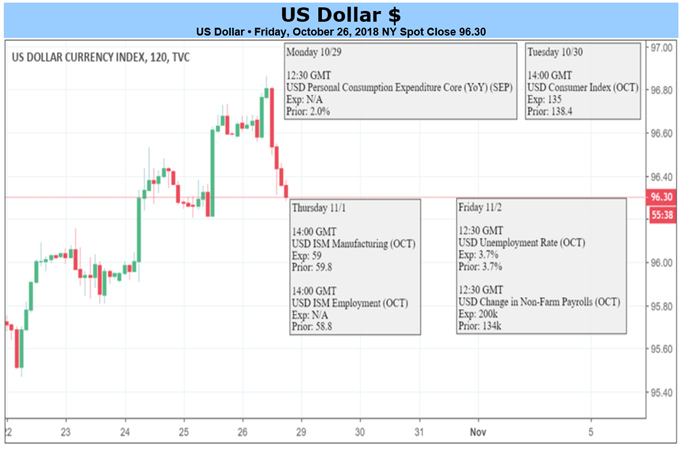 The US Dollar capitalized on market turmoil last week as expected, soaring to a 17-month high against an average of its major currency counterparts. That the advance played out even as souring sentiment weighed on the priced-in Fed rate hike outlook speaks to the benchmark unit’s revived haven appeal, which was conspicuously (if only briefly) absent at the start of the rout in risky assets.

The week ahead brings heavy-duty scheduled event risk back into the picture. October’s labor market data takes top billing, with expectations pointing to a pickup in payrolls growth. Wage inflation might prove to dominate the spotlight however. Average hourly earnings are expected to have grown at a blistering pace of 3.2 percent on-year, the fastest in almost a decade.

That may well amplify worries about an accelerated pace of Fed tightening even as a raft of destabilizing influences continues to encourage de-risking across financial markets. Italy’s populists have locked horns with the EU, a Brexit deal remains elusive and the trade war between the US and China shows no signs of abating. Meanwhile, rising borrowing costs are already threatening fiscal stability in key emerging markets.

On balance, this probably bodes well for the Greenback. The worries now preoccupying investors represent long-term trends that will not be easily unwound. The markets’ inherent long-side bias might produce sharp but short-lived bursts of risk-on momentum, but the appeal of abundant USD liquidity amid a push to “cash out” of exposure to risky assets ought to remain broadly in place.

British Pound Forecast – Brexit, Budget and the Bank of England