US Dollar May Find Renewed Strength in FOMC Meeting Minutes 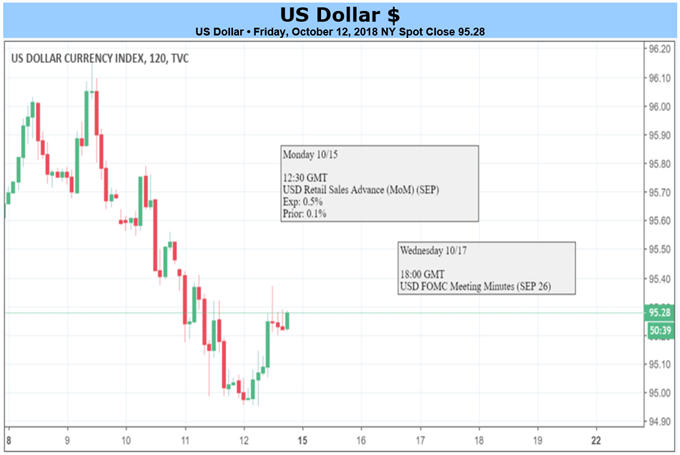 The US Dollar was badly bruised last week in a confounding display that seemed to run directly counter to the benchmark currency’s typical trading dynamics. Bloodcurdling risk aversion swept financial markets mid-week in a move that seemed to be triggered by worries about the swift pace of Fed rate hikes.

Beyond the Greenback’s yield appeal against such a backdrop, one might have expected it to reclaim support from haven demand as dour investors scramble for liquidity. Reality proved to be entirely otherwise, with USD suffering steep losses against nearly all of its major counterparts.

Perhaps the Dollar’s newfound primacy at the top of the G10 FX yield spectrum has realigned it with risky assets, making it vulnerable in risk-off trade. That explanation seems somewhat fanciful however considering investors still ought to prize liquidity in such circumstances, especially with tightening worries in focus.

A somewhat more plausible theory links USD weakness to a flattening of the priced-in 2019 rate hike path implied in Fed Funds futures. This could be suggesting that investors are betting on a so-called “Powell put”, whereby market instability triggers a dovish shift in US monetary policy.

If so, markets might be disabused of such notions when minutes from September’s FOMC policy meeting cross the wires. Fed officials have painstakingly signaled that policy normalization will proceed even as they flagged elevated valuations and acknowledged the risk of instability from policy spillover.

More of the same seems likely to appear in the Minutes document, underscoring officials’ commitment to stay on course while domestic economic fundamentals continue to look rosy. That has scope to revive the US Dollar’s fortunes even sentiment sours further.