US Dollar May Extend Rally on CPI, Churning Market Sentiment 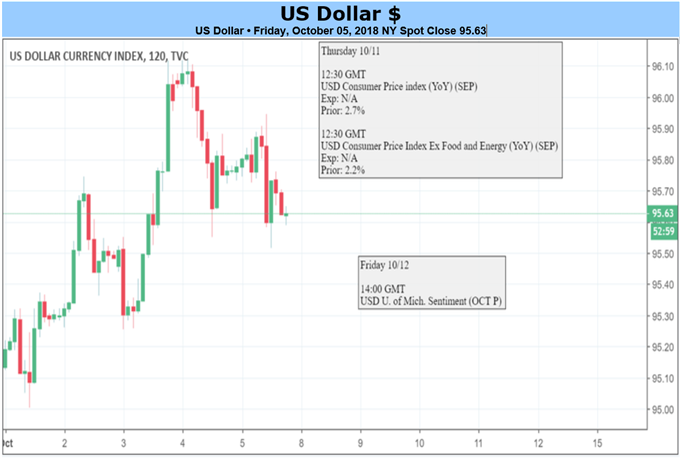 The US Dollar rose for a second consecutive week, buoyed by swelling Fed rate hike expectations. Italy stepped back from a budget row with Eurozone authorities in Brussels, downgrading fears that a fresh fissure within the currency bloc will spill out as broader market instability. That was interpreted as giving the US central bank more room for stimulus withdrawal. Fed Chair Jerome Powell poured fuel on the fire, saying rates may need to rise beyond the “neutral” level.

This led to a sharp steepening of the 2019 tightening path implied in Fed Funds futures, putting it at the most hawkish setting in two years by week-end. Two hikes look to be fully priced in at this point, with the probability of a third at 23 percent. For its part, the rate-setting FOMC committee called for 75 basis points in tightening next year. That leaves the markets room to continue driving the greenback upward if rising conviction brings their baseline closer to that of the central bank.

September’s CPI data lines up as the standout catalyst influencing this narrative in the week ahead. The headline on-year inflation rate is expected to tick down to 2.4 percent, marking a second consecutive month of deceleration. Leading PMI survey data hints an upside surprise may be on tap however. It pointed to accelerating input inflation, citing the impact of recently imposed US tariffs as a key consideration. That was projected to produce the fastest pace of price growth in at least nine years.

While the headline CPI gauge cannot be necessarily expected to parrot that resultexactly, the PMI figures do offer important directional cues. If they prove to foreshadow a stronger print than economists have accounted for, traders will have a compelling new bit of evidence to support further movement toward the more hawkish side of the expected policy spectrum. The benchmark currency is likely to continue building broadly higher against its major counterparts in this scenario.

Churning sentiment trends may provide further impetus, speaking to the US Dollar’s anti-risk appeal. The first round in Brazilian elections may spill over into broader volatility. Updated economic forecasts from the IMF might sound the alarm about the impact of US-led trade wars and a Fed-driven rise in borrowing costs on vulnerable emerging markets. Chief EU negotiator Michel Barnier will deliver a draft political declaration on Brexit, which may set the stage for a final settlement with the UK.