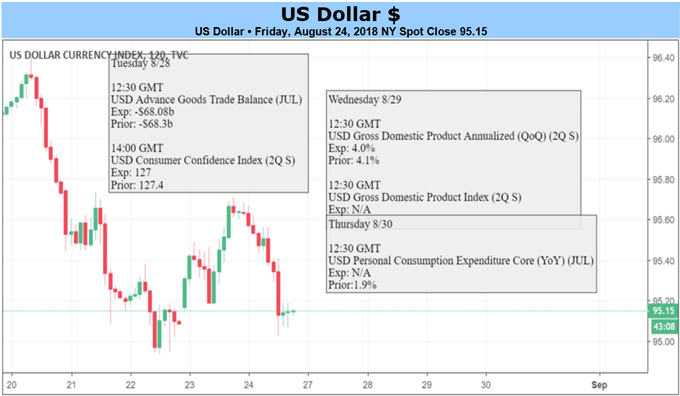 See our free guide to get help gain confidence in your US Dollar trading strategy!

The US Dollar retreated for a second consecutive week, suffering the largest drawdown in over six months. Much of the week was spent shedding earlier gains inspired by haven demand amid turmoil in emerging market assets.

A single-day recovery in anticipation of a speech by Fed Chair Jerome Powell at the Jackson Hole symposium unraveled in its aftermath. He made the case for continued rate hikes but stopped short of dialing up hawkish rhetoric beyond the established status quo.

On balance, the greenback has essentially dialed back the clock on the past three weeks of price action. A telling difference however is that the priced-in likelihood of rate hikes in September and December has firmed in the interim. The probability of the latter is now at 64 percent, up from 57 percent a month before.

The week ahead is relatively thin on scheduled event risk. The second-quarter GDP growth rate is expected to be revised a bit lower, from 4.1 to 4.0 percent. Meanwhile, core PCE inflation is seen returning to the Fed’s 2 percent objective after a brief down drift.

Outcomes broadly in line with expectations may not be sufficient to inspire further hawkish adjustment in the policy outlook, but they might set the stage for price action to acknowledge the upshift that has already taken place since the beginning of the month. That might send the US unit toward the top of its recent range.

Sentiment trends might return as a dominant consideration as Turkish markets return from a week on the sidelines for the Eid al-Adha holiday. The country was ground zero for recent emerging market tumult and may be so again when local trading resumes, rebooting USD-bound haven seeking flows.