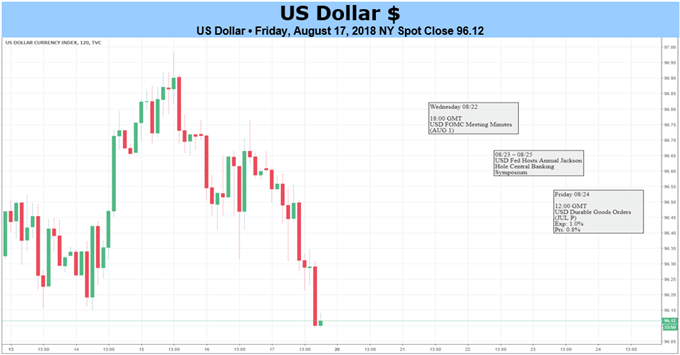 The US Dollar spent most of the past week on the offensive, reaching the highest level in 18 months against an average of its major counterparts. Worries about turmoil in emerging market assets continued to drive haven demand. The advance evaporated in the final 48 hours of trade however as safety-seeking capital flows reversed course amid hopes for de-escalation of the trade war between the US and China.

First, reports surfaced on Thursday that China’s Vice Commerce Minister will travel to the US later this month for trade talks with a delegation led by the Deputy Secretary of State. Then on Friday, the Wall Street Journal reported that officials from both sides are drawing up the roadmap for a comprehensive trade accord before Presidents Donald Trump and Xi Jinping meet in November.

These losses may prove short-lived. The week ahead looks set to remind investors that the greenback is attractive in both risk on and off conditions (albeit for different reasons). Minutes from this month’s FOMC meeting will offer deeper insight into the thinking that produced a decidedly hawkish policy statement. The spotlight then turns to the central bank’s Economic Symposium in Jackson Hole, Wyoming.

The gathering of leading monetary officials and academics is often used as a venue to offer critical forward guidance, setting the stage for major policy developments to follow. To that end, traders will closely scrutinize a speech from Fed Chair Jerome Powell at the conclave. If he sticks to a familiar message – making the case for continued tightening despite emerging market spillover – the US unit is likely to rise anew.