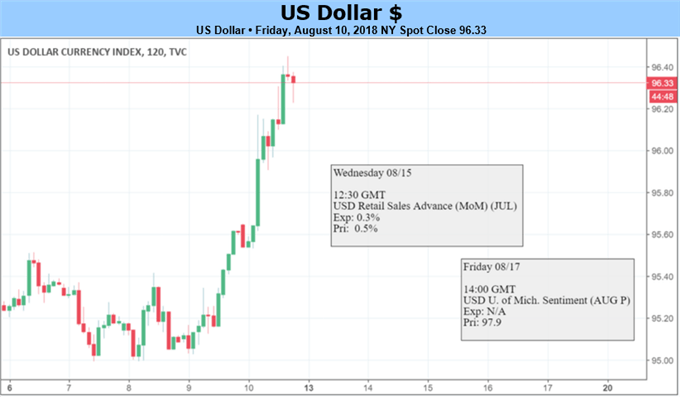 The US Dollar would not let a lull in local data flow slow upward progress last week, finding a catalyst in deteriorating risk appetite across financial markets. While the benchmark unit’s unrivaled liquidity was expected boost its haven appeal, the simmering US/China trade war was thought to be the likely culprit souring investors’ mood. As it happened, a meltdown in emerging market assets driven by turmoil in Turkey and Russia was the trigger, pushing the greenback to a 14-month high.

The week ahead offers an eclectic mix of would-be stimuli for continued volatility. Retail sales and consumer confidence data will inform Fed policy bets, but it would take an improbably dramatic deviation from forecasts to dislodge status quo expectations. The Economic Symposium in Jackson Hole, Wyoming later this month is likely to be the next real inflection point in the narrative. For now, markets have fully priced in another hike in September and peg the probability of a further increase in December at close to 60 percent.

Elsewhere on the docket, results from a series of bond auctions may generate attention. The markets have been concerned about the growth-negative implications of a spike in borrowing costs as the Treasury seeks to finance a yawning deficit amplified by a $1.5 trillion tax cut and $300 billion in increased spending championed by the Trump administration. The Dollar suffered as yields ticked down after demand was impressively stable at a record-setting 10-year note sale last week.

June’s TIC capital flow data will be similarly interesting. Net foreign purchases of US securities have risen alongside bond yields in the past two years, suggesting higher returns are attracting demand. That might bode well for uptake as the Treasury steps up debt issuance. Data showing more of the same might be supportive for the greenback considering the Fed’s hawkish lead in the G10 space. To the extent that this keeps a lid on borrowing costs however, it may yet be interpreted as limiting scope for appreciation.

Needless to say, turmoil around the broader markets remains an important consideration. US tensions with Iran, Turkey and Russia remain unresolved. Trade war concerns continue to escalate as Washington and Beijing hike tariffs on each other. An accord avoiding auto import tariffs on Japan seems likely. Such a result will probably offer a bit of a respite from risk aversion but the overall landscape seems too treacherous to conclude that this will be sufficient for a lasting ‘risk-on’ shift in sentiment.