US Dollar May Extend Advance as Fed Dials Up Hawkish Rhetoric 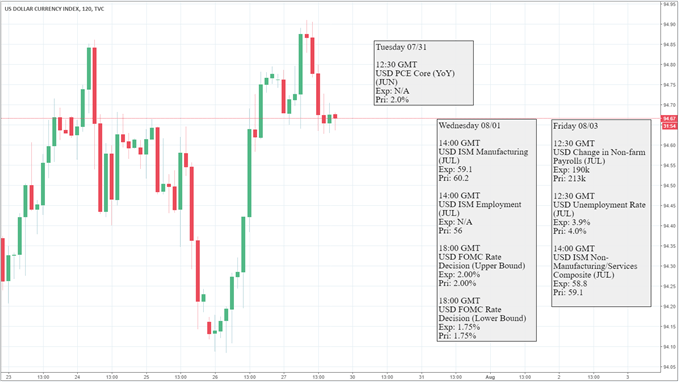 The spotlight turns back to monetary policy in the week ahead as the FOMC rate-setting committee issues a policy announcement and a raft of top-tier statistical releases crosses the wires. PCE data is expected to put core inflation at the target 2 percent on-year for a second month. Separately, July’s jobs report is expected to bring another near-200k rise in payrolls while wages grow at a brisk rate of 2.7 percent.

For their part, Fed Chair Jerome Powell and company are widely expected to keep policy settings unchanged this time having tightened further in June. The priced-in probability of a status-quo result implied by futures markets is 98.8 percent. That puts the spotlight on the statement accompanying the announcement as traders look for clues signaling the central bank might deliver four hikes in 2018.

Market expectations are heavily skewed in favor of a rate hike in September, putting the likelihood of such an outcome at 81.3 percent. That would mark the third increase this year. The chance for a fourth is currently at 59.1 percent. While that marks a notable hawkish shift in recent weeks, it is still only just a bit better than even and leaves ample room for the building of greater conviction to drive the US Dollar upward.

To that end, the central bank may be particularly motivated to dial hawkish rhetoric this time. The latest data flow would make such a position entirely understandable, giving policymakers the cover needed to assert their independence after President Trump complained aloud about tightening efforts. Fed officials may now feel the need for a bit of indirect pushback to burnish their credibility.