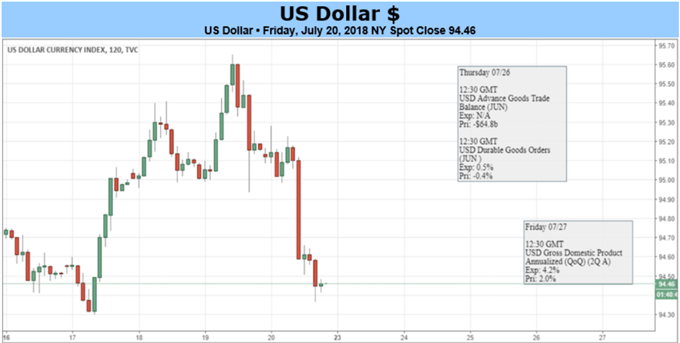 See our free guide to get help building confidence in your US Dollar trading strategy !

The US Dollar seesawed last week, touching a one-year high early in the week only to give up most of the advance by the closing bell on Friday. The early advance was driven by supportive comments from Fed Chair Jerome Powell, who stuck to a cautiously hawkish stance despite recent trade war worries in semi-annual Congressional testimony.

President Trump triggered the reversal Thursday, telling CNBC that he is “not thrilled” by Fed interest rate hikes and asserting that a stronger currency puts the US at a disadvantage. He doubled down despite widespread outrage on the following day, accusing China and the EU of manipulating their currencies and again decrying the tightening of domestic monetary policy.

This sets the stage for fireworks as trade-related issues predominate in the week ahead. G20 finance ministers and central bank governors will almost certainly give Treasury Secretary Mnuchin an earful at a gathering in Buenos Aires over the weekend. European Commission President Junker will try to mend fences in a meeting with Mr. Trump Wednesday while the WTO mulls US/China tensions at a meeting Thursday.

All this precedes a turn to focus back on economic as second-quarter GDP crosses the wires Friday. The annualized growth rate is expected to surge to 4.2 percent, marking the strongest performance in close to four years. Timelier PMI data published earlier in the week will imply such momentum carried over into July if economists’ expectations prove to be broadly indicative.

Mr. Trump’s move to jawbone the greenback lower may have reflected a familiar strategy: showing strength before a negotiation in an attempt to win more favorable terms. Such bullying may have been meant to set the stage for the meeting with Mr. Juncker, where the US President might be looking to exact the highest price possible for backing down on plans of higher auto import tariffs.

US Department of Commerce hearings on the proposed duties increase revealed deep domestic opposition last week. Pushing on with such unpopular policy will probably not do Republican lawmakers any favors in the upcoming midterm election and Mr. Trump is likely to sacrifice it in any case. A media coup at the expense of Mr. Juncker that casts him as an assertive dealmaker in the process seems like the object of the game.

Robust GDP data might well offer cover for a climb-down. Highlighting displeasure with Fed tightening hardly makes sense when the economy appears to be firing on all cylinders, for which the White House is no doubt eager to take credit. On balance, this probably means that the US Dollar has scope to return to the offensive in the week ahead.