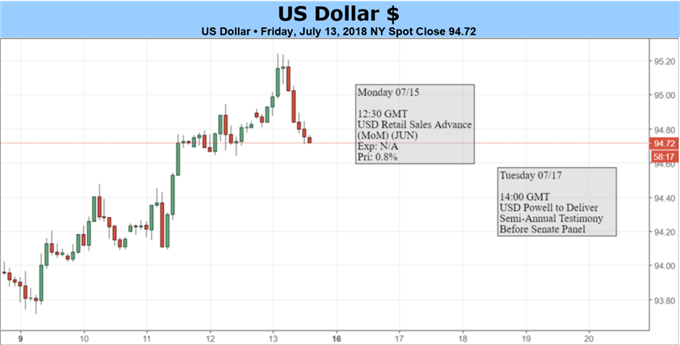 The DailyFX Q3 US Dollar Forecast is available to download.

We move to neutral on the US dollar this week based purely on the current strength of the US economy but note that further upside in the currency may be dampened as US President Donald Trump continues to ratchet up his ‘America First’ trade war campaign. The recent announcement of additional tariffs on $200 billion worth of Chinese imports has done little to ease market nerves, while President Trump’s obvious annoyance with Germany’s huge trade surplus is causing concern within the European Union. Reciprocal trade action by both China and the EU will weigh on the US economy although it will take months before their effects are registered or felt.

While the trade war tit-for-tat continues, the US economy remains robust allowing the Fed to continue normalizing monetary policy by raising interest rates further. Recent higher-than-expected inflation prints, coupled with unemployment at a record low should confirm another two 0.25% rate hikes this year (making a total of four or 1%) with three more hikes penciled in for next year. While Q1 annualized GDP growth of 2% may have missed expectations of 2.2%, the economic boost from the President’s tax cut program will continue to help the economy expand.

Looking Ahead to Next Week (w/c Monday July 16)

The two standouts on the economic calendar come early in the week with Fed Chair Jerome Powell’s testimony on Tuesday the main focus for traders. In an interview on Thursday, Powell said that the US economy is ‘in a good place from a cyclical standpoint close to maximum employment and stable prices targets’. He warned however that the recent trade war escalation could weigh on the current strength of the economy.

DailyFX Economic Calendar for the week ahead.

USD Technical Analysis: DXY at Familiar Resistance Yet Again, Will it Hold?

In summation, the US dollar remains strong and will likely push further ahead although the path higher may be bumpy. Risk/reward suggests that dip-buying the USD against weaker counterparts remains the best way forward and, on the flip side, that short-selling the greenback may prove expensive.