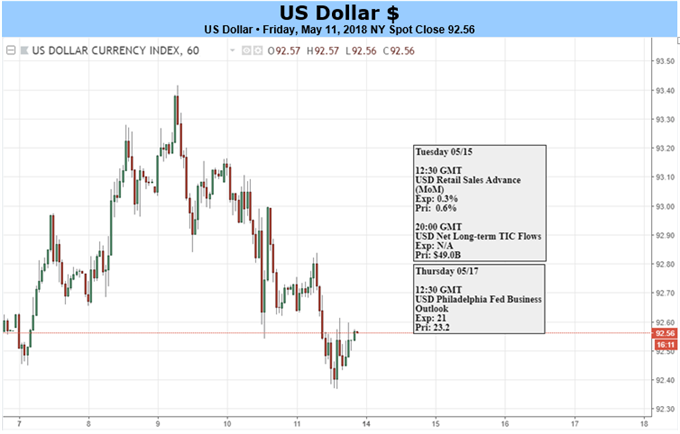 The US Dollar probed four-month highs last week but ultimately settled little-changed against an average of its major counterparts. The week’s top two items of interest on the economic calendar – a speech from Fed Chair Powell and April’s CPI report – seemed to reinforce status-quo policy bets. Powell said international spillover will not deter Fed tightening and headline inflation printed in line with forecasts at 2.5 percent.

All this was broadly as expected, stalling trend development and opening the door for a consolidative pause after the greenback’s breakneck gains over the preceding three weeks. The data docket thins out in the week ahead, with April’s retail sales report amounting to the only top-tier item due. Absent a wild deviation from forecasts however, the outcome is unlikely to alter the priced-in outlook.

This is likely to see investors’ focus shifting to a steady stream of comments from current and aspiring Fed officials. Scheduled remarks from eight of the current crop of policymakers are due to cross the wires. Confirmation hearings for Richard Clarida and Michelle Bowman – nominees to the Vice Chair and community banking posts on the Board of Governors – are also on tap.

San Francisco (and soon to be New York) Fed President John Williams and Governor Lael Brainard stand out among speeches from existing central bank officials. The former is a bellwether for the consensus view on the rate-setting FOMC committee while the latter’s recent conversion to a hawkish disposition has already proven to be market-moving, lighting the fuse for the latest US Dollar rally.

The sentiments of Mr Clarida and Ms Bowman will be closely scrutinized as well. If confirmed, both will immediately acquire a vote on current policy decisions. Both are seen as generally in line with the mainstream of US central bank officials. Comments affirming their support for gradual stimulus withdrawal may seen as reinforcing the case underpinning the Dollar’s recent gains and give it another upward nudge.

External influences are also important to consider. CPI and GDP readings from Japan and the Eurozone are expected to produce weaker results. Meanwhile, minutes from the latest RBA meeting will probably strike a dovish tone. In all, that might undercut the case for policy normalization outside of the US and burnish the relative appeal of the US currency versus its G10 FX counterparts.