US Dollar Outlook Hinges on the Severity of Coming Market Turmoil 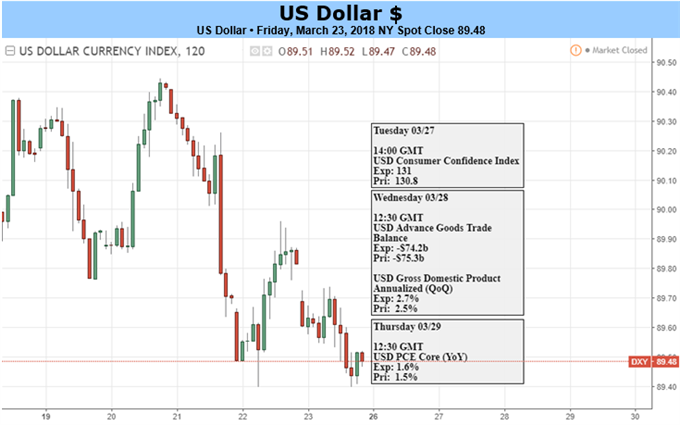 Fundamental Forecast for the US Dollar: NEUTRAL

US politics triggered brutal bloodletting across financial markets last week, handing the bellwether S&P 500 stock index its biggest loss in over two years. A staff reshuffle at the White House purged moderating voices on the foreign policy front shortly after the same fate befell the economics team, surrounding President Trump with a cadre of enablers encouraging his most bellicose tendencies.

The exit of top economic advisor Gary Cohn in opposition to tariffs that Mr Trump levied on steel and aluminum imports paved the way for still more protectionism. This time, the President slapped China with tariffs of up to $60 billion as punishment for alleged intellectual property theft, which Beijing promptly promised to counter with duties of their own.

Not surprisingly, the markets are worried that the subsequent ouster of Secretary of State Rex Tillerson and last week’s resignation of National Security Advisor H.R. McMaster will precede escalation of another kind. Tellingly, Mr McMaster will be replaced with former UN Ambassador John Bolton, a vocal hawk that has advocated preemptive military action against Iran and North Korea.

The US Dollar seems to be of two minds about all of this. At times, it adopted the haven role it played during the 2008-09 crisis and its immediate aftermath, rising on the back of market turmoil. These forays to the upside have been promptly checked as markets weighed the probability that a meltdown in risk appetite will derail the Fed’s rate hike cycle.

Incoming economic data is unlikely to help the greenback remedy this conflict. A revision of fourth-quarter GDP data is expected to see thegrowth upgraded from 2.5 to 2.7 percent. Meanwhile, the Fed’s favored PCE inflation gauge is forecast hit 1.6 percent in February, the highest in 11 months. These outcomes will reinforce the FOMC’s cautious optimism, but that is probably the extent of their significance.

On balance, the outlook likely hinges on the severity of continued liquidation across the risky asset universe. Aggressive, broad-based selling akin to Friday’s price action will probably boost the greenback as capital flows favor liquidity above all else. A slower grind that leaves open the possibility that markets can muddle through without derailing the global recovery altogether might keep yields in focus, sending it lower.