Burning Coals and US Treasuries: USD Remains in the Fiscal Cross-Fire 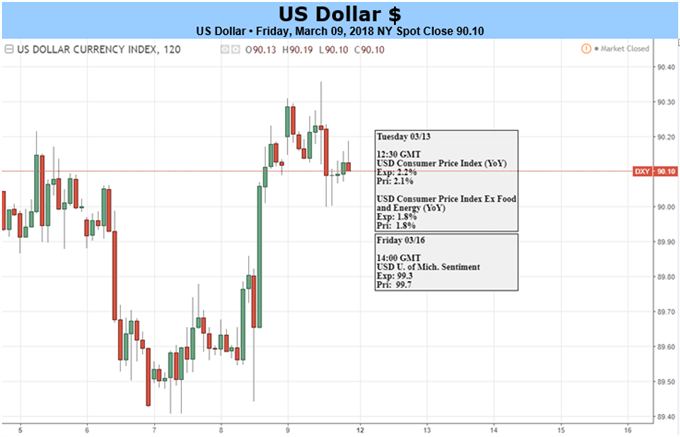 The US Dollar is looking to cap-off a second week of indecisive price action: After last week saw a Doji print around the 90.00 level on DXY, this week’s bar is currently showing a spinning top formation around the same price. Despite this back-and-forth, it was actually a rather interesting week of short-term movement in the Greenback. As we opened on Sunday, USD weakness continued to show, extending the declines that had started on the prior Thursday around ‘Tariff talk’. That weakness ran into the early-US session on Tuesday morning, at which point a bit of support began to show around 89.40. Prices ran up to test the 90.00 level, but as we’ve seen in multiple instances over the past six weeks, bullish motivation started to wane on tests above that level and prices pulled back after the Non-Farm Payrolls report.

US Dollar Price Chart: Four-Hour Time-Frame, Back to 90.00 as Range Expands 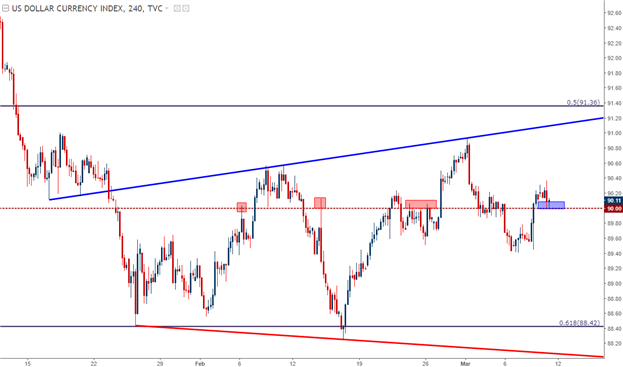 The big USD-driver for this week was Non-Farm Payrolls, released on Friday to a strong print of +313k versus an expectation of +205k. Normally, a beat of this nature would really grab attention from Dollar bulls attempting to get in-front of higher probabilities for rate hikes in the near-future. And to be sure, we did see those nearby rate expectations firm, as probabilities for a hike at the Fed’s March meeting have moved up to 88.8% via CME Fedwatch. But what didn’t’ come along with that move was the US Dollar, as traders merely used this morning’s bump-higher to sell DXY right back down to 90.00. A logical explanation for this weakness was the lagging Average Hourly Earnings in this morning’s report, coming in at 2.6% v/s a 2.8% expectation; which runs in stark contrast to last month’s surprising 2.9% number that was revised-down to 2.8% this morning. But – US Dollar weakness has been a fairly pervasive theme for over a year now, so there’s likely another explanation of what’s helping to keep the US Dollar so weak on a longer-term, bigger-picture basis. 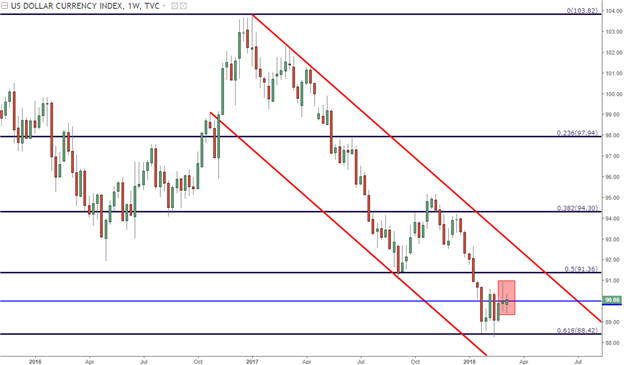 At this point, markets are pricing in a 34.2% chance of a full four rate hikes out of the Fed this year, with a 73.3% chance of three hikes in 2018. This runs in stark contrast to other Central Banks around the world, with both the European Central Bank and the Bank of Japan both avoiding the topic of rate hikes altogether at this week’s rate decisions, continuing with their current full-throttle QE outlays.

Spot FX markets are forward-looking, just like bond markets or equity markets. Market participants aren’t usually going to wait around for a rate hike to begin pricing that in because, frankly, it could already be too late to actually trade the move by the time the hike is announced. So, the fact that we’ve seen a US Dollar that’s lost as much as 15% from last year’s high continuing to sell-off, even as the Fed is one of the only games in town on the rate hike front, and this would point to the fact that something else is going on here as market participants are and have been adjusting to the current backdrop.

Last week we looked at a possible explanation for this when we discussed US fiscal policy. The US government is expanding at a fast pace, with $500 Billion in extra spending over the next couple of years along with an extra $1 Trillion in tax cuts over the next ten. The US government runs at a deficit; so to fund these initiatives the Treasury department is going to need to raise funds through debt auctions. These debt auctions will increase the supply of Treasuries, which will pull prices-lower, all factors held equal (supply/demand equilibrium). The lower prices on Treasuries to take into account the new additional supply would also bring along higher yields, much as we’ve seen so far throughout 2018.

Paul Tudor Jones, the legendary and famed trader and Hedge Fund manager made a comment earlier in February in which he said: “If I had a choice between holding a US Treasury bond or a hot burning coal in my hand, I would choose the coal.” This will likely remain as a pertinent theme across global markets in the near-term, and this will probably continue to impact the US Dollar as demand for US Treasuries and, in-turn, demand for the US Dollar lags as driven by US fiscal policy; even in the face of tighter monetary conditions. 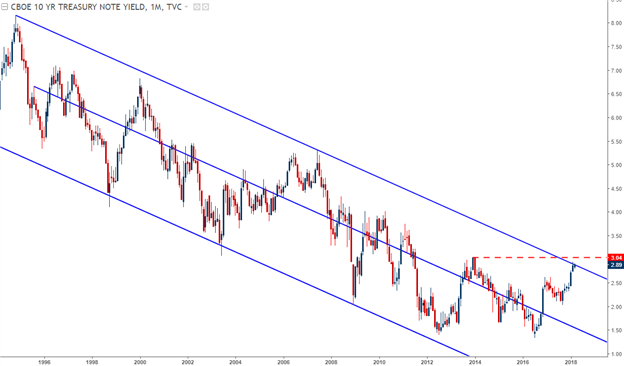 This is relevant because it’s likely a key factor behind the US Dollar’s pervasive weakness, even as the Fed is one of the few developed Central Banks actively tightening rates. This is also something that could keep pressure on the Greenback, particularly as there are other Central Banks still actively supporting their respective bond markets via QE programs in both Europe and Japan. If you’re at a hedge fund or if you’re trading bonds, why take the risks of standing on a slippery slope in US Treasuries when much more optimal conditions are available overseas; at least for now? This also helps to explain why the Euro has been so strong over the past year despite the fact that Yields across the continent remain at extremely low levels.

Next Week’s Calendar: High-Impact US Data on Tuesday, Wednesday and Friday

The big item out of the US next week are February inflation figures, set to be released on Tuesday morning. The expectation is for 2.2% annualized on the headline number to go along with 1.8% for Core inflation. Retail sales figures are released the following morning, currently carrying an expectation for a .4% print; and the week closes with U of M Consumer Sentiment. These can each bring some baring on near-term price action, particularly the inflation report as the week after brings the March FOMC rate decision.

DailyFX Economic Calendar: High-Impact US Items for Week of March 12, 2018

The fundamental forecast for next week in the US Dollar will be set to neutral. While the longer-term bearish trend remains, along with the possibility for more, the flares of strength that have shown over the past two weeks should not be ignored. Next week brings inflation figures, and the week after that brings the March FOMC rate decision with that widely-expected rate hike. That rate decision will be new Fed Chair Jerome Powell’s first at the bank, so this would be a good time to get a read on the new head of the Fed. This could also be an environment ripe for a squeeze for USD-shorts, and this may be an opportune time to wait for rips in order to sell at higher prices.