US Dollar to Focus on External News Flow, Look Past FOMC and NFP 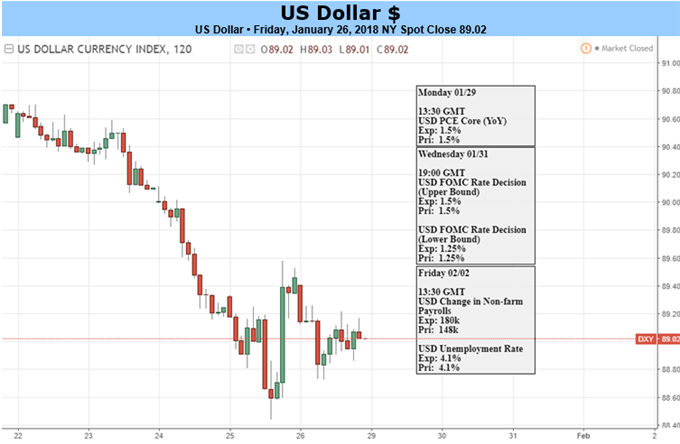 Find out here how recent price action has matched up with our first-quarter US Dollar forecast !

The US Dollar continues to face heavy selling pressure, falling for a seventh consecutive week against its major counterparts. That is the longest losing streak in over 13 years. The currency seems to have become a victim of its own success: starting in 2014, the greenback enjoyed three years of gains as the Fed tightened policy while its G10 peers lagged behind. Now, a rosy global growth outlook is inspiring catch-up bets.

The US currency added nearly 37 percent since the Fed began tapering QE asset purchases and through the peak in early 2017. Since then, a cautious balance has emerged between the markets’ expectations of the on-coming rate hike path and that of policy officials. Both seem to have settled on 2-3 increases due in 2018, with this baseline now apparently so entrenched that active speculation has turned elsewhere.

That new narrative has focused on the probability that an increasingly broad-based pickup in global growth will push other central banks to follow the Fed’s lead. The prospect of a shrinking yield gap between the Dollar and other currencies – especially at a time when the Fed’s own policy is all-but priced in – has understandably sent capital flows out of the benchmark currency and into non-USD alternatives.

Looking ahead, an FOMC policy announcement is likely to pass without fanfare as officials manage the handoff from Chair Janet Yellen to Jerome Powell. Policy bets seem so firmly anchored that the usually market-moving ISM and nonfarm payrolls reports will probably need to dramatic deviate from forecasts to command attention. That will probably keep investors’ focus on outside developments.

Beyond the US, there are some signs that markets may have overreached. All three central banks to deliver policy updates so far this month – the BOC, the BOJ and the ECB – have vocally pushed back against the notion that they are gearing up for major hawkish policy shifts. A surprisingly weak New Zealand CPI reading appeared to hint that the RBNZ will not be in a hurry to lift rates either.

BOE Governor Mark Carney may join the chorus of officials warning against aggressive tightening when he speaks before Parliament’s Treasury Select Committee in the week ahead. An expected downtick in Eurozone CPI will reinforce the ECB’s cautious tone. Australian CPI is projected to rise however, encouraging suspicions that the RBA may deliver a hike sooner than is currently accounted for.

On balance, the greenback might find a lifeline if domestic news-flow delivers a series of (seemingly unlikely) upside surprises that boost the possibility of a fourth rate hike this year. Alternatively, it may perk up if external tightening prospects seem to ebb, triggering a retracement of recent moves. Those two scenarios aside however, the US currency seems vulnerable to deeper losses.