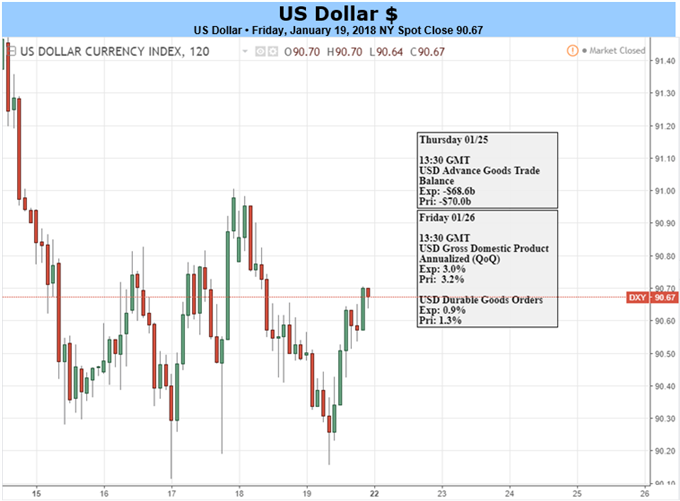 It was the start of another rough week for the U.S. Dollar as markets re-opened after an extended holiday weekend in the United States. DXY sank down to a fresh three-year low, extending the dramatic fall from last week after a bit of resistance began to show off of the December low. Last week’s move was pushed by a batch of releases last Friday when U.S. CPI and Advance Retail Sales figures were released. While core inflation surprised to the upside, a miss in Retail Sales seemed to grasp markets’ attention, and this led to a strong bearish move that continued into the start of this week.

The Greenback struggled to regain its footing initially, with another lower-low printing on Tuesday evening; but since that’s come-in, support has appeared to settle just a bit above the 90.00 level on DXY. This support has held up even throughout a disappointing piece of data on Friday of this week: University of Michigan consumer confidence came-in at 94.4 versus the expectation of 97.00, and this represents a fresh six month low in that data point. But this was perhaps offset by a bit of profit taking as bears tighten up risk ahead of this week’s close.

U.S. Dollar via ‘DXY’ Four-Hour: Dollar Attempts to Carve Out Support Above 90.00

The big piece of U.S. data for next week comes out on Friday when Q4 GDP is released. We also get a high impact print with the Advanced Goods Trade Balance on Thursday, but before that we have some major Central Bank rate decisions out of Japan (Tuesday) and Europe (Thursday morning). Each of these can bring significant bearing on flows in the Dollar, as macro trends have been a large factor in the currency’s recent movement.

The big question surrounding both of those Central Banks at the moment is when they might be gearing up towards a stimulus taper, and while markets have been appearing to price-in such a theme out of Europe for much of last year, this is a more recent debate surrounding the Bank of Japan. While the ECB has continually evaded the topic of stimulus exit, markets spent much of last year bidding the Euro-higher in anticipation of as such. When the ECB extended their stimulus program in October, this brought a mere two weeks of weakness into EUR/USD; but when a red-hot GDP number was released out of Germany in mid-November, buyers came right back to continue the 2017 bullish trend. This, of course, helped to create significant Dollar weakness throughout last year as forward-looking flows swapped out a weak USD with the Euro.

Regarding Japan – the Yen was one of the few currencies that could keep pace with the Dollar’s weakness for the last eight months of 2017. This created a range-bound environment in the pair, but early last week rumors began to circulate that the BoJ may be looking slowly begin tapering asset purchases when they bought fewer long-dated bonds. This created a spate of Yen strength that lasted for a few days around worries of a ‘stealth taper’, which was eventually faded out of markets, but it bears focus nonetheless as we approach next week’s BoJ rate decision. If the BoJ does signal that stimulus taper may be on the horizon, as could be noted by the insertion of the key word of ‘normalization, ’ then we will likely see Yen strength that will help to bring another leg of weakness into global U.S. Dollar flows.

The fundamental forecast for the U.S. Dollar will be set at neutral for next week. While the down-trend in the Greenback is extremely attractive, the inability to break below 90.00 this week, combined with the stretched nature of the longer-term trend make for a difficult backdrop to prod for continuation whilst so near multi-year lows.