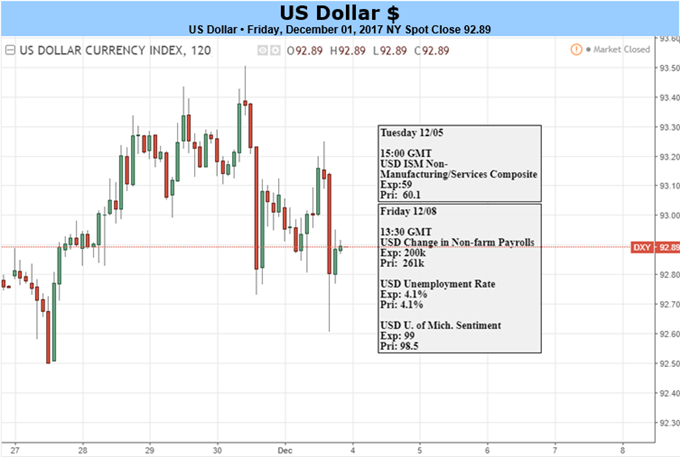 The US Dollar might’ve enjoyed amid reports that Senate Republicans have enough votes to pass tax cut legislation Friday. That would have marked a significant step toward realizing a fiscal boost that markets expect will drive inflation and force the Fed into a steeper rate hike cycle in 2018.

The news was tarnished by another bombshell from Special Counsel Robert Mueller however. He issued charges against former National Security Advisor Michael Flynn, who is now reportedly ready to testify that President Trump directed him to make contact with Russia during the 2016 election campaign.

This is a major blow for the Trump administration, sapping it of much-needed political capital. Passing the tax bill in the Senate would still leave much to be done before cuts are realized as legislation, and getting through that process with the White House under mounting pressure may be prohibitively difficult.

Looking ahead, this makes for a clouded landscape. The coming week is relatively light on top-tier economic data until November’s payrolls data hits the wires on Friday, putting political firmly in focus. That speaks to a period of kneejerk volatility powered by headlines emerging out of Washington DC.

Indeed, it may well be that incoming economic news-flow is rendered impotent, at least in the near term. A rate hike looks all but fully priced in for this month’s FOMC meeting, making the 2018 policy path the central object of speculation. Sinking fiscal stimulus hopes are far more significant to that calculus.