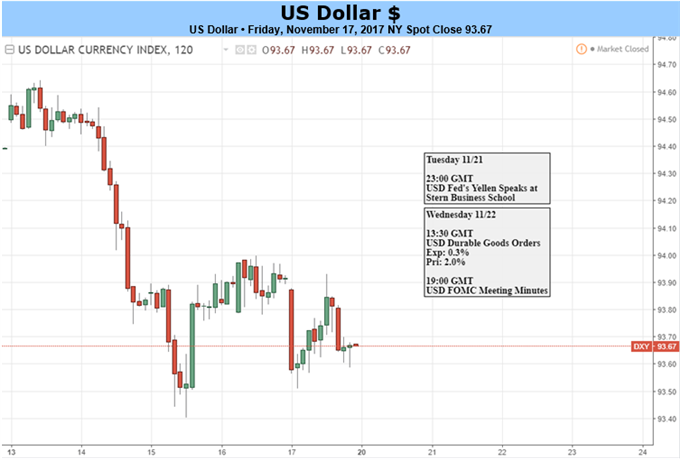 The US Dollar continued to retreat last week as the prospect of expansionary fiscal policy that boosts inflation and nudges the Fed into a steeper rate hike cycle continued to fade. Lawmakers in the House of Representatives passed a version of tax reform that substantially differs from the Senate version – especially after the latter baked in repeal of “Obamacare” – signaling a treacherous reconciliation process ahead.

Meanwhile, the investigation into the 2016 election conducted by Special Counsel Robert Mueller edged closer to President Trump’s inner circle. The Wall Street Journal reported that Mr. Mueller has subpoenaed documents from the Trump campaign as he tries to establish any possible collusion between it and Russia. That has stoked political instability fears, pouring cold water on hopes for legislative progress.

Looking ahead, the economic calendar offers little in the way of top tier event risk on a week shortened by the Thanksgiving holiday. November’s Markit PMI survey roundup is perhaps most noteworthy for a timely business cycle update. Fed Chair Yellen is also due to speak at Stern Business School and minutes from the latest FOMC meeting are scheduled for release.

With a December rate hike all but priced in however, politics and their influence on the 2018 monetary policy path will probably remain at the forefront. Priced-in probabilities implied in Fed Funds futures show traders see the chance of an increase at 97 percent. In fact, this measure has held above 90 percent for two weeks after a steady build since early September.

This means headlines emerging out of Washington DC are likely to continue triggering ad-hoc bursts of volatility, making for a challenging trading environment. Ebbing liquidity ahead of the holiday might dampen activity absent the emergence of a major bombshell but could also translate into sharper price swings if something truly game-changing hits the wires. Traders would be wise to proceed with caution.