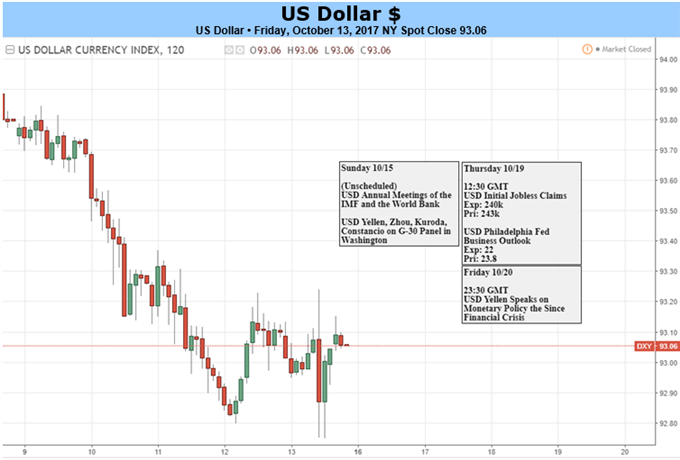 US Dollar Looks to Yellen Speech to Revive Upward Momentum

The US Dollar spent last week firmly on the defensive as traders chopped away at gains scored on the back of firming Fed rate hike expectations since mid-September. Minutes from last month’s FOMC meeting revealed widespread concern about reflation prospects that were seemingly reinforced by disappointing CPI statistics published Friday.

Fed Funds futures imply the priced-in probability of a rate increase at the policy-setting committee’s last meeting in December at 73.3 percent. That is down from 78.5 percent a week ago. However, it is also miles ahead of the 38.9 percent chance that traders assigned to such a scenario one month ago. This speaks to an underlying fundamental backdrop that is more supportive than last week’s performance implies.

The week ahead brings plenty of stateside economic data but most of what is on offer is unlikely to make or break monetary policy expectations. The Fed’s Beige Book regional economic conditions survey is perhaps the lone exception. If that translates seems to suggest that the forces holding back inflation are dissipating as FOMC hawks have argued, the greenback may enjoy a fillip.

It ought to be commentary from Fed officials that proves most potent however, with a speech from Chair Janet Yellen understandably in the spotlight. The central bank chief has made no secret of her preference for continuing to scale back stimulus. More of the same is likely this time around, with emphasis on the need to pre-empt excessive price growth signaling a rate hike in December is all but assured.

New York and San Francisco Fed presidents Bill Dudley and John Williams – influential members of the FOMC’s centrist core and Yellen’s close confidants – have offered some telling commentary in recent weeks. Both have suggested that preventing inflation overshoot means tightening along the way toward reaching the 2 percent target instead of waiting for it to be realized.

Yellen might offer a preview of Friday’s tone at a G-30 panel with colleagues from the PBOC, the BOJ and the ECB over the weekend. Dudley is also scheduled to speak mid-week and might offer further insight. If all of this sets separates conviction in a December rate increase from recent data missteps and any disappointments yet to happen in the next 6 weeks, the US Dollar is likely to soar anew.