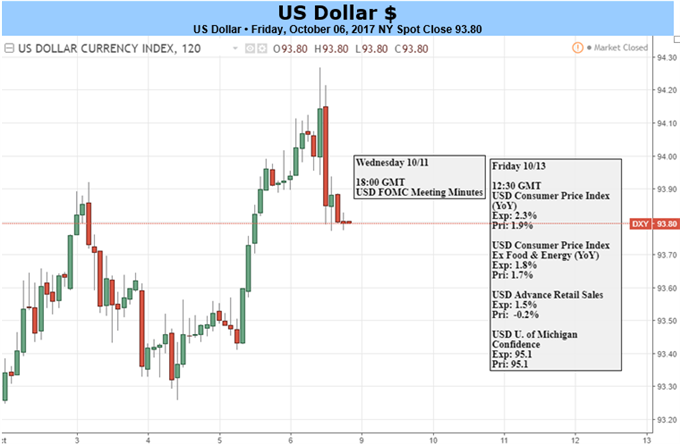 US Dollar Aims to Extend Advance But Politics Threaten Progress

The US Dollar has mounted a spirited recovery amid firming Fed rate hike prospects over the past two weeks. The currency is now trading within a hair two-month highs against an average of its major G10 FX counterparts. The probability of a December rate hike implied in Fed Funds futures now stands at 78.5 percent having been just 22 percent a month ago.

The week ahead offers plenty of fodder for continued speculation. Minutes from September’s FOMC meeting will help clarify policymakers’ thinking but a wealth of commentary since the sit-down has already established a clearly hawkish bias. That stance is by no means unanimous, but the driving core of the rate-setting committee seems to buy the case for on-coming reflation and the resulting need to tighten.

That seems to put single out September’s CPI report as the pivotal bit of event risk on the docket. The headline inflation rate is seen rising to 2.3 percent, the highest in six months. Steady improvement in US economic news-flow relative to forecasts since mid-June and September’s explosive jump in wage growth (2.9 percent on-year, the highest since May 2009) open the door for an upside surprise.

With that said, the treat that politics will distract investors from economic fundamentals remains ever-present. Negotiators from the US, Canada and Mexico will convene for the fourth round of talks to reforming NAFTA. US President Trump has mused about the process’ likely failure. It is unclear whether this was tactical posturing, performance art for the domestic audience, or genuine opposition.

Trump is also due to give a speech on the fate US policy toward Iran. Suspicion is swelling that the address will precede a move to “decertify” an Obama-era accord with Tehran exchanging sanctions relief for the reduction of Iran’s nuclear capabilities. If this proves to be the case, Congress would have 60 days to fast-track re-imposing sanctions, which would probably see the agreement fall apart entirely.

To the extent that incoming headlines make markets genuinely concerned about the economic fallout from a breakdown of NAFTA and/or from tearing up the Iran nuclear deal, resulting risk aversion might cool Fed rate hike bets. Conclusively negative outcomes are unlikely even in the worst case scenario however: trade negotiations may stretch on and Congress may not re-establish previously relaxed sanctions.

In fact, if the political landscape turns truly dire and produces aggressively risk-off dynamics, there is an argument to be made for US Dollar gains as the benchmark unit reclaims its haven appeal. On balance, this suggests that – despite some noteworthy potential pitfalls – the path of least resistance for the greenback continues to favor the upside.