US Dollar Will Try To Build on Post-FOMC Gains. Will It Succeed? 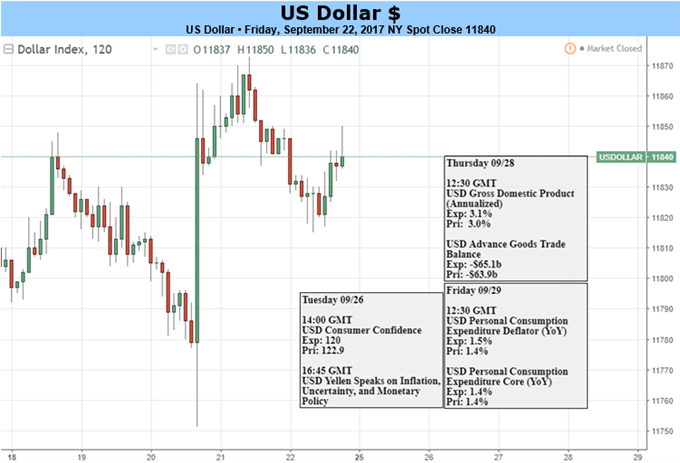 The US Dollar was spared a fifth consecutive week of losses, with the Fed monetary policy announcement helping prices to rebound from a 15-month low. Chair Janet Yellen and company stood by near- to medium-term rate hike projections despite disinflation in the first half of the year, which markets saw as comparatively hawkish (as expected). They also announced the start of “quantitative tightening” (QT).

The priced-in probability of another rate increase before year-end now stands at 63.2 percent. While this is a marked increase from 46.7 percent recorded just a week ago, it still this leaves ample space for further certitude to make its way into the forecast and thereby boost the greenback. With that in mind, traders will be keen to size up a slew of speeches from central bank officials and a sprinkling of top-tier economic data.

The speaking docket is packed, with policymakers from across the FOMC bias spectrum including Yellen due to opine on the economic outlook. As for data, the final revision of the second-quarter GDP reading and August’s PCE inflation gauge – the US central bank’s favored way to track price growth – will cross the wires. Narrow improvements are expected on both fronts.

US data flow has steadily improved relative to consensus forecasts since mid-June, hinting that analysts’ models may be understating the economy’s vigor and establishing a cautious bias favoring more of the same. Investors may upgrade their own conviction in further hikes if this is matched by a confident tone from the broad range of Fed speakers, boosting the US currency.

Stimulus withdrawal prospects may not be supportive in isolation however, meaning the Dollar might struggle to capitalize even as rate hike expectations strengthen if other central banks are seen playing catch-up with the Fed. High-profile speeches from ECB President Draghi as well as BOE and BOC Governors Mark Carney and Stephen Poloz stand out in this regard.

The Eurozone’s monetary authority will decide on the fate of its QE asset purchases next month, with many market participants seemingly primed for a cutback. Meanwhile, the BOC has launched its own rate hike cycle recently and the BOE has signaled it is preparing to follow suit in the near term. Bargain-hunting in the early stages of tightening outside the US may prove too compelling to pass up for investors.