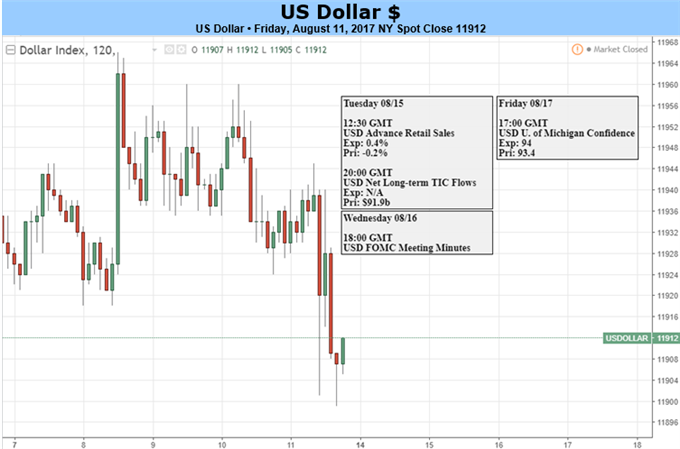 Retail traders expect the US Dollar to rise. Find out here what this hints about the actual price trend!

The US Dollar finds itself torn between the influence of speculation about Federal Reserve monetary policy and swelling geopolitical risk. This ought to make for a volatile week ahead critical economic news-flow comes across the wires against a backdrop of simmering tension between the US and North Korea.

Sizing up scheduled event risk, minutes from July’s FOMC meeting take top billing. As ever, traders will be keen to gauge the level of confidence in policymakers’ standing projection – last updated in June – for three interest rate hikes in 2017 (of which two are already in the history books).

For their part, the markets put the probability of another hike at just 38 percent. In fact, the priced-in outlook implied in Fed Funds futures has actually deteriorated in recent weeks even as the labor market showed signs of impressive strength and inflation rose for the first in five months (albeit less than expected).

July’s FOMC policy statement duly sounded the alarm on sluggish price growth. It said the rate-setting committee is “monitoring inflation developments closely” even as it reiterated the expectation that the 2 percent objective will be met over the medium term.

Elsewhere on the docket, July’s retail sales figures and August’s University of Michigan consumer confidence gauge are on tap. Improvements are expected on both counts and upside surprises may be in store if the results echo broadly firming performance relative to forecasts from US data in since mid-June.

Taken in isolation, this might have made for a mildly supportive environment for the greenback. The Fed isn’t given to bombastic rhetoric so the Minutes document is unlikely to deliver an unqualified bombshell one way or another. Cautious optimism there coupled with upbeat data could have nudged up rate hike bets.

Headlines from Washington DC may throw all of this off-course however. President Donald Trump threatened military action against North Korea last week, sending the markets scrambling. The panic did not sate his appetite for fiery rhetoric as he floated the possibility of a “military option” in Venezuela on Friday.

On one hand, another round of geopolitically driven risk aversion is likely to dim rate hike prospects. This need not necessarily hurt the Dollar however. Investors prize capital preservation over yield when fear trumps greed and the US currency might yet reclaim its “liquidity haven” credentials.

Gains might be uneven in such a scenario however. Gains in the Yen and Swiss Franc may outpace the buck while higher-yielding commodity bloc currencies lose ground against it. The Euro may also find itself in the latter camp having earned something of a pro-risk guise amid ECB QE tapering speculation.