Dollar Downtrend in the Spotlight Ahead of FOMC Minutes, NFP 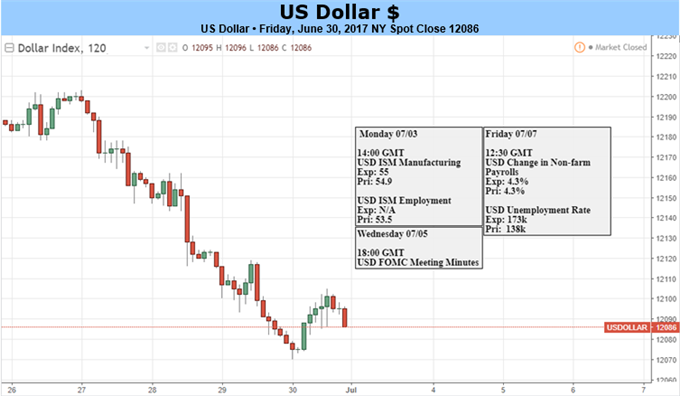 The U.S. Dollar put in a precipitous decline this week, setting yet another new low as price action fell below the election night swing from November of last year. This means that we’re now looking at an -8% decline in the Greenback, peak-to-trough, from the 2017 high to this morning’s low; and surprisingly, the Federal Reserve has remained persistently hawkish throughout this period as we’ve now seen three rate hikes in the past seven months. But this recent decline probably has less to do with the Fed and more to do with what else is happening in U.S. economic data relative to the rest of the world; which has opened the possibility of the European Central Bank moving closer to exiting their stimulus program, or perhaps even the prospect of an actual rate hike from the Bank of England in the U.K.

This theme really came to life on Tuesday and Wednesday of this week when the who’s who of global Central Banks met in Europe. While Janet Yellen echoed the cautiously-confident tone that she’s become so well-known for, Mario Draghi delivered a speech that many market participants construed in a hawkish light: The Euro jumped-higher and continued running-up for most of the week, and the decline in the Dollar really began to show as DXY plummeted down to fresh eight-month lows. The day after Mr. Draghi’s comments we heard that an ‘unnamed ECB source’ indicated that the speech was ‘misjudged’, as the intent was to be more balanced in nature rather than signaling any potential tightening of policy. But by then, it was too late, and markets seemed to care little about this anonymous source’s opinion as Euro strength and Dollar weakness just continued to run after a momentary dip in both trends were soundly pounced upon.

The bane of the Dollar appears to be the softening in U.S. data that’s been gaining prominence since mid-March, right around the Fed’s previous rate hike. The Citi Economic Surprise Index measures where U.S. data prints relative to expectations, with higher values indicating stronger data relative to lower expectations, and the index was at 57.9 on March 15th. Since then, the index has cratered lower and just last week we saw this indicator hit a five-year low below -70.0, its weakest level since August of 2011. So, while the Fed remains really confident about near-term conditions and economic outlook, the data simply has not supported that feel-good euphoria and, frankly, it has not kept pace with stronger expectations for growth and inflation in Europe. This has filtered into spot rates, and is playing a key role in the Dollar’s downtrend as the currency is down by almost 1/12th of its value so far in 2017, even with the Federal Reserve maintaining a hawkish outlook, looking to continue with rate hikes.

On that topic of data - next week is a big one for the Greenback, despite the holiday-shortened backdrop in U.S. markets with Tuesday being Independence Day. Monday is a half-day across U.S. equities exchanges, and the ISM Manufacturing Survey is released at 10 AM ET. Matters thicken considerably on Wednesday afternoon, as we get the meeting minutes from the Fed’s rate decision in mid-June, and this should be very interesting considering the topics of balance sheet reduction along with the four hikes that the Fed says they are expecting out to the end of 2018. And then on Friday, we get the ‘tip of the spear’ on the data front with the release of Non-Farm Payrolls for the month of June. The current expectation is for +180k jobs to have been added in the most recently completed month, an improvement from the +147k print that was seen for May.

The challenge around the Dollar at the moment is that while the down-trend is extremely attractive for continuation purposes, the market is oversold by a number of metrics. RSI divergence continues to show on the Daily chart, and DXY price action is catching near-term resistance on the under-side of the bearish channel that’s governed much of the Greeback’s 2017 down-trend: So, a bearish break of an already bearish channel below a number of key support levels. Next week’s introduction of fresh data could breathe some amount of life into the Dollar, and at that point – it becomes interesting for a short-side continuation thesis under the presumption of further losses to follow. 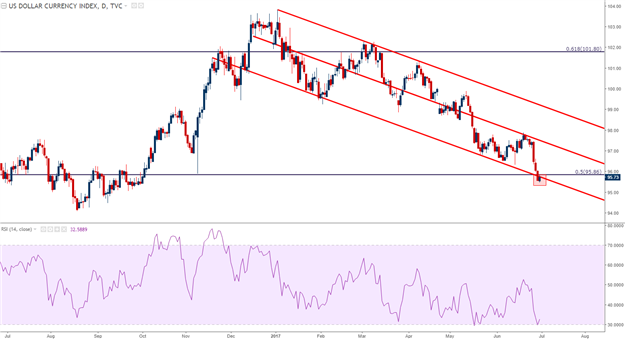 The forecast for the U.S. Dollar next week will be set to neutral. Rips-higher or revisits to ‘lower-high’ resistance can be sold; but until we get some element of pullback in the trend, managing risk for continuation approaches will likely remain a challenge and, as such, we look at a neutral stance going into this heavy week of data around a heavily oversold market.