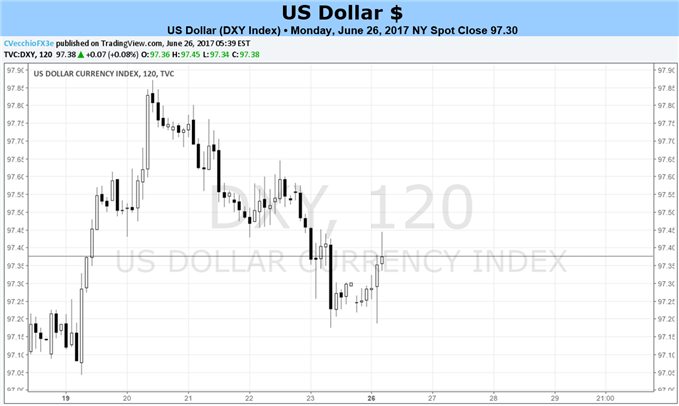 US Dollar Heads into Barrage of Economic Data This Week

- A supersaturated economic calendar has the chance to breath life into the dejected US Dollar.

With a light economic docket and a lineup of hawkish Fed speakers, the US Dollar was buoyed last week only modestly. The greenback’s search for a base remains elusive, particularly in the wake of the June FOMC meeting which produced a 25-bps rate hike for a third consecutive quarter. The feedback loop for US Dollar gains is simple: better economic data will provoke a faster Fed tightening cycle.

Unfortunately for the US Dollar, at present time, US economic data has been consistently disappointing. According to the US Citi Economic Surprise Index, US data momentum is at its lowest level in six-years. With a supersaturated economic calendar this week (in what feels like payback for last week’s lull), the US Dollar has its best chance to solidify its rebound if data turns the corner.

After a week that produced exactly zero ‘high’ rated events, this coming week will see six (and another 22 ‘medium’ rated events). There are some heavy hitters in the data release lineup as well. Monday brings about preliminary May Durable Goods Orders, which are a proxy for the long-term financial health of the US consumer. Tuesday will bring the release of the June Consumer Confidence report, as well as a speech from Fed Chair Janet Yellen in London on global economic issues.

Wednesday will produce the May Advance Goods Trade Balance, while Thursday will produce the final Q1’17 GDP estimate. Perhaps the most important release of the week, the May Personal Consumption Expenditure Core figures on Friday will be most critically watched as it’s one of the Fed’s preferred gauges for inflation. While there will be a plethora of data in between, these events stand out as the most important for the US Dollar in its search for a bottom.

Overall, improved data can remedy the source of weakness for the US Dollar right now: markets not believing the Fed’s prescribed path for raising rates and normalizing policy. While at its June meeting the FOMC said that it intended to raise rates one more time in 2017 and begin the balance sheet normalization process by the end of the year, interest rate markets are only pricing in March 2018 as the earliest period for the next Fed rate hike. In fact, rates markets are only pricing in one hike between now and the end of 2018. A bit of steepness in the rate pricing curve would go a long way to helping what’s been a dejected US Dollar through the first half of 2017.

See how our Q2’17 US Dollar forecast held up - check out the DailyFX Trading Guides.