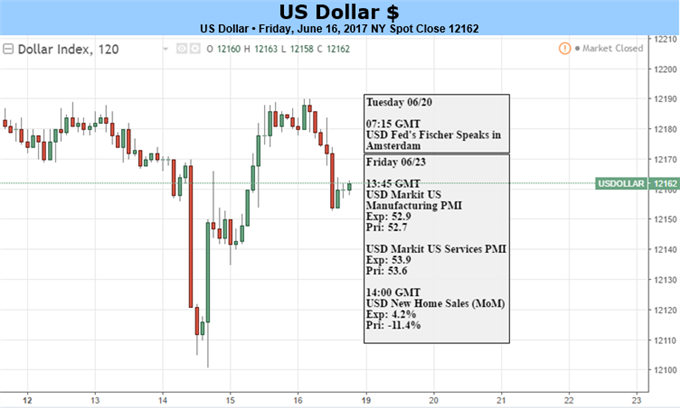 The US Dollar finds itself caught between a brazenly confident Federal Reserve and skeptical financial markets. The central bank has shrugged off a run of weak economic data and fizzling inflation, dismissing these setbacks as temporary and promising another rate hike before the year is out. Officials have also laid out plans to accelerate tightening by starting to scale down the bloated post-crisis balance sheet.

Investors have not resolved to overlook worrying news-flow as readily. Expectations priced into December Fed Funds futures show the markets expect the policy rate to remain within the current 100-125 basis point target range. Put another way, they expect that rate hikes are done for the year. Resolving this disparity one way or another will define the greenback’s near-term trend.

A thin offering of top-tier scheduled event risk leaves markets without an obvious catalyst to tip the scales for most of the coming week. The preliminary set of June PMI surveys is a standout, offering a timely test of the Fed’s confidence in the economic cycle, but it won’t cross the wires until Friday. That will leave it up to a steady stream of comments from Fed officials to set the tone, which may bode well for the US unit.

The influence of US political uncertainty risk remains an ever-present wildcard however. The investigation into possibly improper contact between Russian officials and the Trump campaign is probing higher up the food chain. Indeed, independent counsel Robert Mueller is reportedly investigating the President directly on potential obstruction of justice charges.

This means that whatever may be happening around financial markets, it is now a given that a bombshell revelation of some sort may emerge unannounced with drastic consequences. If market-wide risk appetite evaporates in such a scenario, the markets may well conclude that the Fed will be forced to the sidelines whether it likes it not, sending the Dollar lower.