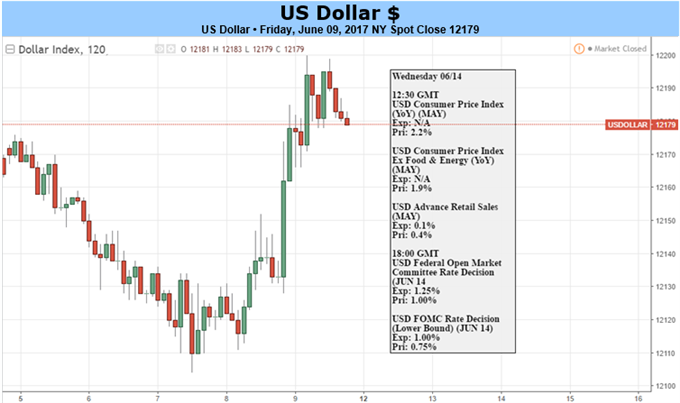 US Dollar May Rise on Fed Optimism, European Political Woes

The US Dollar revisited eight-month lows only to roar higher in the final 48 hours of the trading week, erasing prior losses and touching a three-week high before finishing last week with a modest gain. The belated recovery followed Congressional testimony from ousted FBI director James Comey, which did not produce an unambiguous existential threat to for the Trump administration.

That seemed to cool fearsof political instability derailing the near-term Fed rate hike outlook. The greenback rose alongside front-end Treasury bond yields while gold – the benchmark anti-fiat asset – turned tellingly lower. Fed Funds futures now price in a 98 percent probability of a hike at next week’s FOMC conclave, up from 90 percent a week before.

An increase in June has been all-but-certain for some however. More tellingly, the projected 2017 rate hike path shifted to the steepest in a month. If the Fed endorses the hawks’ newfound confidence – sticking with a forecast calling for three rate hikes this year despite a string of disappointing economic data outcomes since mid-March, the benchmark currency is likely to make further headway.

Deepening political turmoil in Europe may give the Dollar a further lift. An inconclusive UK election outcome has made on-coming Brexit negotiations appear even more uncertain. Prime Minister Theresa May will stay on and looks to have cobbled together an alliance – if not a formal coalition – with Northern Ireland’s DUP. It favors a “softer” Brexit but sits to the right of Tories on social issues, a recipe for friction.

As the political risk pendulum swings from the US to Europe once again, investors may opt to shun regional assets. That may see capital pouring out of the associated currencies and into comparable alternatives. The US unit is a natural beneficiary of such rebalancing and be all the more able to capitalize if the Fed incentivizes traders with a comparatively hawkish posture.

Still, the argument for the other side is equally plausible. Another round of worrying headlines from Washington DC may yet spook financial markets and Fed officials alike. Optimism fueled by newfound “soft Brexit” hopes may yet prove durable, at least until whatever UK government ultimately emerges shows itself to be a precarious arrangement. With that in mind, the landscape is uncertain and the outlook fluid.