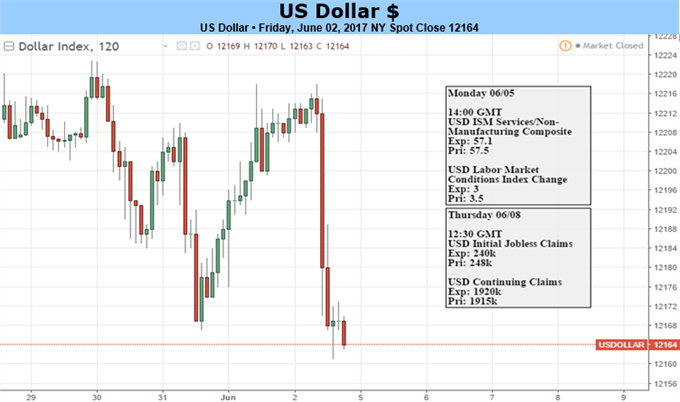 US Dollar at Risk as Political Jitters Rattle Financial Markets

Retail traders expect the US Dollar to rise. Find out here what that hints about the price trend!

The US Dollar succumbed to renewed selling pressure last week, giving up most of the previous week’s gains. The down move accelerated against a backdrop of cooling Fed rate hike speculation to culminate in Friday’s outsized drop after May labor-data proved disappointing.

The economic calendar thins out in the week ahead, with the service-sector ISM survey amounting to the only bit of truly top-tier event risk. Meanwhile, Fed-speak vanishes entirely as policymakers go mum ahead of the June 14 monetary policy announcement.

This hardly translates into quiet conditions however as politics overtakes the spotlight. A much-anticipated general election in the UK promises to stir activity well beyond local markets as voters pick who will steer them through Brexit proceedings.

The ballot was expected to hand the ruling Conservatives an easy win just recently but a sudden narrowing in the polls has raised the specter of a hung parliament. Such an outcome may sour market-wide risk appetite and undermine the Fed’s wherewithal to sustain a tightening cycle, hurting the US Dollar.

Meanwhile, the investigation into possible links between Trump administration officials and Russian operatives will heat up as ousted FBI director James Comey testifies. That will compete for investors’ attention with Congressional efforts to loosen Dodd-Frank financial regulations.

News-flow pulling the White House deeper into the scandal would probably rattle markets and undermine the greenback. Hopes for a more hands-off regulatory regime may help counter selling pressure but are unlikely to offset it fully as executive branch turmoil casts a cloud over implementation.