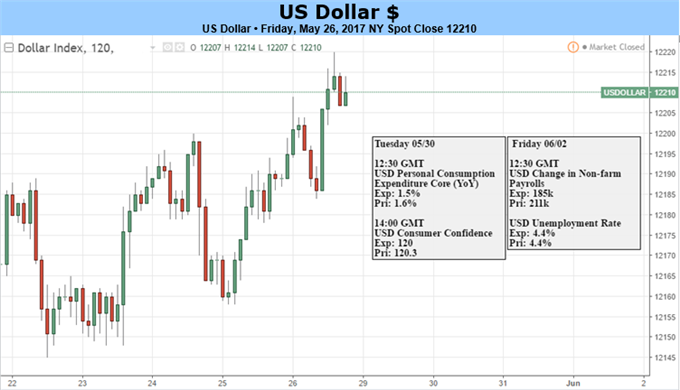 Want to discuss the outlook for the US Dollar with a DailyFX analyst? Join a Q&A webinar!

The re-emergence of economic fundamentals helped the US Dollar find a lifeline last week, as expected. The currency had been battered by political instability fears as the Trump administration looked increasingly mired in a scandal about senior members’ contact with Russian officials.

The week ahead will offer plenty of top-tier economic data to fuel further speculation. The Fed’s favored PCE inflation gauge and its Beige Book survey of regional economic conditions as well as the ISM manufacturing-sector survey and official labor-market statistics are all due to cross the wires.

The latest GDP revision notwithstanding, US economic news-flow has increasingly underperformed relative to consensus forecasts over the past two months. This warns that analysts’ models may be overestimating the economy’s vigor, opening the door for downside surprises.

Absent a major dislocation in financial markets, a June hike is probably a foregone conclusion at this point. However, the Fed’s updated forecast for the rates path thereafter has market-moving potential. A soft round of data outcomes may be seen as reducing scope for a third increase, hurting the greenback.

Political risk continues to be an important wild card. Rancor at the G7 leaders’ meeting over the weekend and a steady stream of news-flow on the investigation into the Trump camp’s Russian connection may keep markets on edge. In turn, that may hurt demand for USD-based assets and pressure the currency.