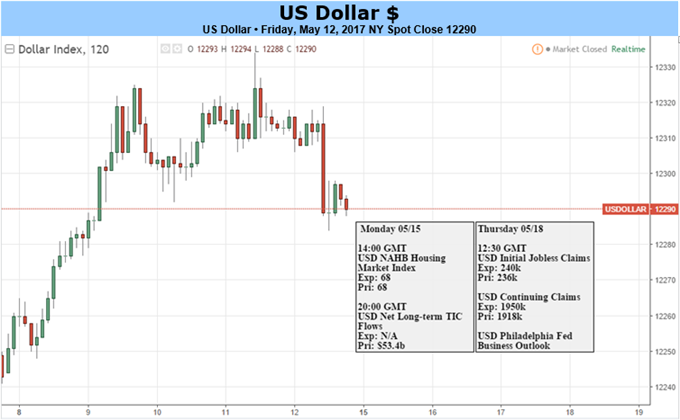 Have a question about trading the US Dollar? Join a trading Q&A webinar and ask it live!

The US Dollar enjoyed a fourth consecutive week of gains, marking the longest winning streak yet this year. Prices marched higher alongside a steepening Fed rate hike path as traders positioned for what is now seen as a near-certain rate hike at the June policy meeting.

The rosy mood faltered in the final hours of the trading week however. April’s CPI and retail sales numbers fell short of consensus forecasts. The priced-in tightening outlook duly moderated and the greenback plunged against its top counterparts.

Seeing the US currency responding to marginally softer data flow is somewhat surprising considering the FOMC has brushed off recent weakness as “transitory” and signaled it will press on with policy normalization. That it was not responsive to an upside surprise on jobs data also seems telling.

To be sure, the probability of a June rate hike is only marginally lower, down to 97.5 percent from 100 percent a week ago. Furthermore, it is entirely plausible that Friday’s US data served as an excuse for profit-taking and so the markets’ response to it may not imply anything about subsequent price action.

Still, with over a month left before the FOMC convenes again, much can happen to alter the landscape. The markets’ skewed view of that conclave’s outcome might mean that prices are inherently more likely to move on news-flow that clashes with the status quo versus the alternative.

The coming week brings a lackluster offering of US economic data, with only second- and third-tier releases due to cross the wires. A meager helping of Fed commentary may pass without fireworks if central bank officials remain cautiously hawkish per the status quo.

This may put the spotlight on external developments with potential to upend market-wide risk appetite. The Fed has shied away from trimming stimulus when sentiment unravels and the week ahead offers plenty of potential threats, all of which may trigger a risk-off scenario that hurts the US unit.

An election in the bellwether state of North Rhine-Westphalia will help gauge Angela Merkel’s chances of returning as German Chancellor after this year’s election, G7 finance ministers will issue a statement after a meeting in Italy over the weekend and US President Trump will give several speeches.