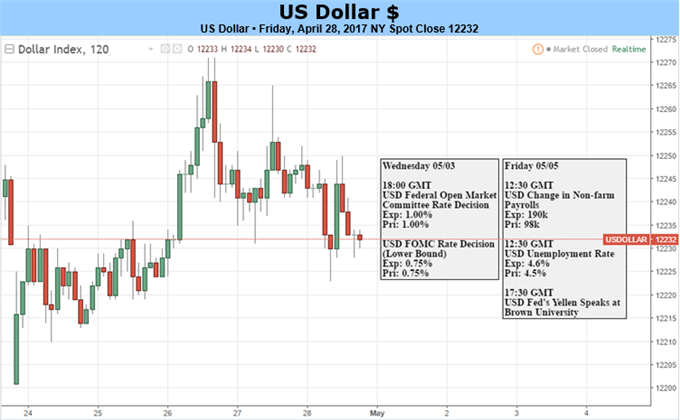 US Dollar at Risk as Fed Decision-Makers Reconvene

The outcome of the first round in the French presidential election gave the US Dollar its best week yet this year. A runoff remains to be contested, but the probability that a eurosceptic will lead the second-largest EU member state now seems significantly lower.

In turn, this has reduced the chance that a burst of destabilizing risk aversion will force the Federal Reserve to abandon its plan for three interest rate hikes this year. Indeed, the priced-in 2017 tightening path implied in Fed Funds futures steepened by the most in two months.

The road ahead may prove more challenging as the focus turns back to homegrown concerns. The FOMC will deliver a rate decision that is overwhelmingly expected to yield no changes. The accompanying statement will be of paramount importance however as investors attempt to divine what comes next.

The US economy has plainly stumbled. Weeks of disappointing economic data flow culminated in a gloomy first-quarter GDP report. The key question now is whether the central bank thinks this to be a temporary step off-course or fears something more sinister and longer lasting.

The Fed’s own Beige Book survey of regional economic conditions remained optimistic even as data flow increasingly underperformed relative to consensus forecasts. If this foreshadows a sanguine attitude in the FOMC policy statement, the greenback is likely to advance.

Further, the market-moving potential of soft data outcomes will be diminished. That may dull the pain of disappointment if April’s payrolls figures also fall short of expectations. However, the same outcome will probably sink the currency if the Fed sounds concerned and looking for reasons to backpedal.