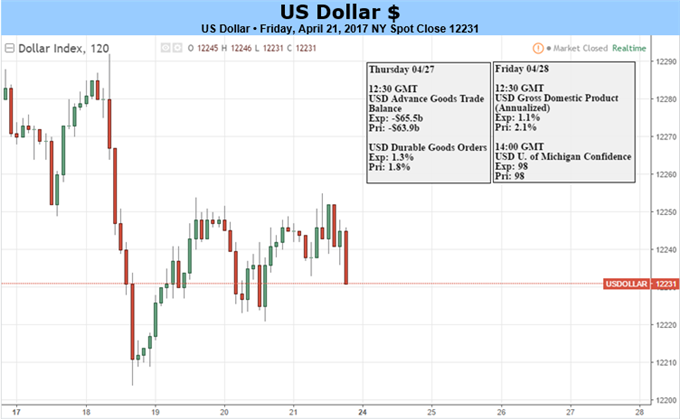 The US Dollar fell for a second consecutive week as the Fed rate hike outlook continued to deteriorate. Geopolitical jitters are almost certainly a big part of that story, even if the narrative has somewhat shifted from US tensions with Russia and North Korea to EU politics. Homegrown factors have also emerged however amid growing worries about slowing economic growth.

An ominous picture is painted by the closely watched GDPNow model from the Atlanta Fed. It updates quarterly GDP growth projections with each incoming bit of relevant economic data. That forecast now predicts that output will add just 0.5 percent in the three months to March. That is far weaker than the 1-2 percent range expected by the markets.

This disparity will be addressed as the first official estimate of first-quarter GDP growth crosses the wires in the week ahead. Consensus forecasts already point to a slowdown, with the annualized growth rate seen ticking down to 1.1 percent from 2.1 percent in the final quarter of 2016. US news-flow has sharply deteriorated relative to baseline projections recently however, opening the door for a still weaker result.

Such an outcome may undermine the Fed’s case for three rate hikes in 2017 in the minds of investors, pressuring the greenback downward. The GDP report is set for release on Friday however, the currency at the mercy of other catalyst in the interim. On this front, the French presidential election set for this weekend may very well prove formative.

Voters will go to the polls to narrow their options from four to two contenders. The latest polling data has the field clustered near the 20 percent support mark. That makes the possibility that they will be stuck with choosing between two eurosceptics – Marine Le Pen on the right and Jean-Luc Melechon on the left – uncomfortably high.

The markets will be most pleased if Ms Le Pen and Mr Melechon are eliminated at this stage in the process, although this seems unlikely. The next-best option – and one that ought to be supportive for risk appetite – is that Ms Le Pen advances to face a strong opponent in the second round. From here, investors would probably prefer centrist Emmanuel Macron to soft-right Francois Fillon.

An outcome that boosts sentiment will make for a backdrop that is more conducive to Fed tightening, all else being equal. The central bank has understandably shied away from stimulus withdrawal at times when investors’ mood has soured. That means that a second round with at least one palatable option – especially if that is Mr Macron – is likely to send the greenback higher ahead of the GDP report.

Headlines out of Washington DC are another important consideration after US President Donald Trump said he will unveil a tax reform proposal mid-week. That is a key centerpiece of the “Trump trade” narrative predicting faster Fed rate hikes as expansionary fiscal policy boosts inflation. That means the markets’ bets on the merit and pass-ability of the White House proposal will be formative for the US currency.