US Dollar May Rise as Trump Jawboning, Geopolitical Fears Recede 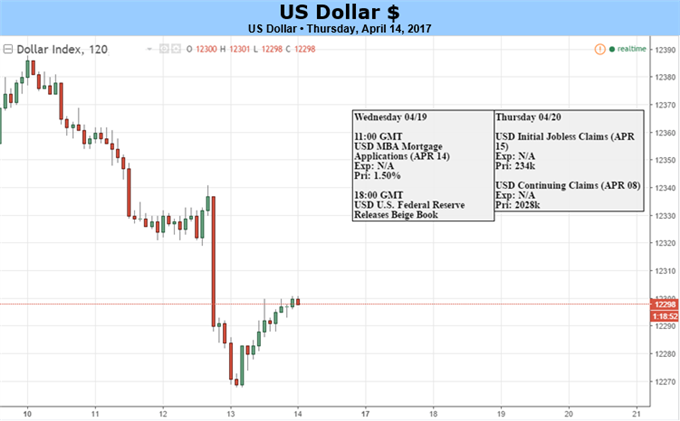 What will drive the US Dollar trends through June? See our forecast to find out!

The US Dollar snapped a two-week winning streak as geopolitical tensions and jawboning from the White House made for toxic cocktail of catalysts.

Friction between the US and Russia is on the rise after a surprise missile strike against a Syrian airbase, which Moscow vocally disapproved of. Discord between the world’s lone superpower and North Korea are also on the rise as officials ramp up rhetoric and a fleet of US warships heads for waters off the country’s coast.

Meanwhile, US President Donald Trump saw fit to tell the Wall Street Journal that the greenback is “getting too strong”, sending the currency plummeting against its major counterparts. That seemed to stoke worries about retaliation. Taken together with geopolitical saber rattling, it seems hardly surprising that risk aversion swept the markets, undermining Fed rate hike prospects.

An economic calendar packed with second-tier data releases will probably give way to reckoning with these developments in the week ahead.

First, the White House is unable to alter the path of the exchange rate unilaterally in the near term. That speaks to diminishing returns to jawboning over time. Further out, Mr Trump’s expansionary economic platform – if actually implemented – would probably boost inflation and push the Fed toward faster rate hikes, sending the greenback upward.

Second, Secretary of State Rex Tillerson seemed dismissive of the crisis in the Ukraine even as he hardened official rhetoric on Russia’s support for Syrian leader Bashar al-Assad at a G7 foreign ministers’ meeting. This may yet set the stage for an accommodation where an easing of Ukraine-related Western pressure is traded for a reduction of Russian support for the Syrian regime.

The markets need only to weigh these considerations for them to begin shaping US Dollar price action. In this scenario, the rebuilding of Fed rate hike expectations may see the benchmark currency return to the offensive. A reasonably solid Beige Book – the central bank’s assessment of regional economic conditions that informs its policy decisions – may help matters.