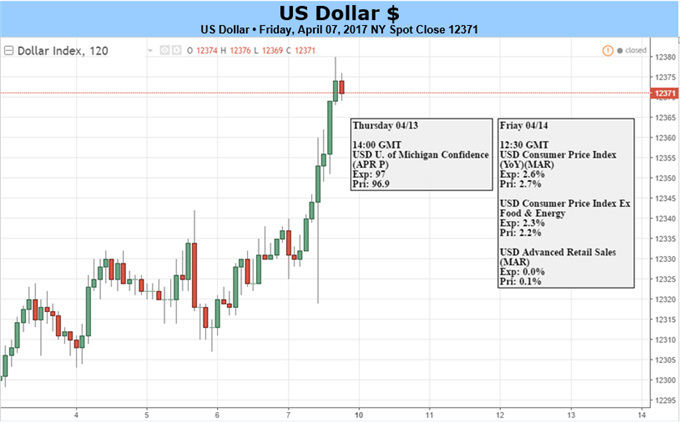 Where is the US Dollar heading in the second quarter? See our forecast to find out!

The US Dollar rose for a second week as Fed rate hike expectations continued to recover. An encouraging jobs report and US President Donald Trump’s seemingly cordial meeting with his Chinese counterpart Xi Jinping stood out as catalysts.

March employment figures fell short of expectations on the headline payrolls reading but the jobless rate declined even as labor force participation held steady and wage inflation held near eight-year highs. That suggests the smallish payrolls gain speaks to nearing “full employment” rather than something ominous.

As for the Trump/Xi sit-down, the US head of state called their budding relationship “outstanding” and senior cabinet officials echoed similar sentiments after meetings with their Chinese counterparts. That appeared to ease worries about a globally destabilizing rift, removing a potential barrier to Fed tightening (for now).

Next week, a speech from Fed Chair Janet Yellen is likely to reiterate an intent to press on with stimulus withdrawal and CPI data is expected to show a pickup in core inflation. That may keep the greenback marching higher as traders weigh the US policy path against standstill elsewhere in the G10.

Geopolitical jitters may yet overshadow macro fundamentals however. The full ramifications of last week’s surprise US missile strike on Syria will take time to emerge. Escalating tensions may undermine market-wide risk appetite. Since the Fed is not keen to hike rates gains such a backdrop, this may hurt the US unit.

Performance may be disparate in a risk-off scenario given the benchmark currency’s haven asset status however. It may track lower against the Japanese Yen but stands to gain versus sentiment-geared alternatives like the Australian and New Zealand Dollars if the markets’ mood sours.