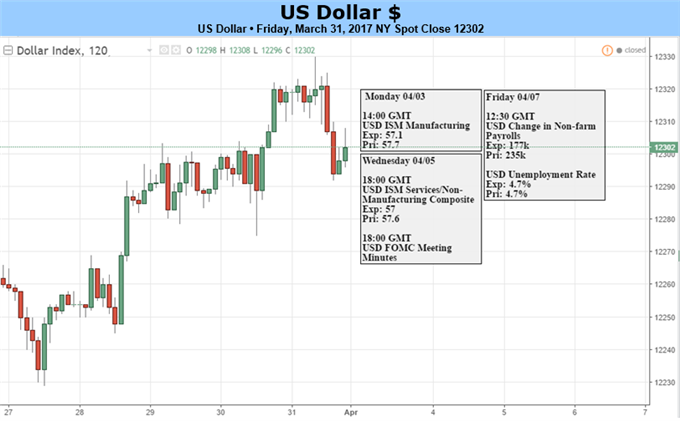 Where is the US Dollar heading in the second quarter? See our forecast to find out!

Tightening bets cooled after Fed officials shied away from boosting their own projections for on-coming rate increases at the March FOMC meeting and the failure of the AHCA healthcare reform bill struck at the heart of the “Trump trade”. Those shorter-term considerations may be giving way to a broader view.

Near-daily comments from Fed officials have reiterated their intent to continue stimulus withdrawal over the past two weeks. This was capped by a revised set of GDP figures that showed the economy grew faster than economists expected in the final three months of 2016.

Taken together, this seems to have reminded the markets that the US central bank is alone in its firm intent to pull back accommodation among its G10 counterparts. Critically, it may have also pressed the point that this will probably occur (on some scale) regardless of what happens with US fiscal policy.

The week ahead will offer plenty of opportunities to confirm if this is truly so. On the data front, ISM manufacturing- and service-sector activity surveys and the March jobs report are in focus. The Fed will also publish minutes from the last FOMC sit-down.

Whether these outcomes support the case for rate hikes seems secondary. Monitoring if and how the greenback responds to the results will be critical. Complimentary dynamics – where the currency rises and falls on good and bad news-flow, respectively – may mean the shadow of fiscal uncertainty has been lifted.

A meeting between Donald Trump and his Chinese counterpart Xi Jinping may complicate matters however. The US President said the meeting will be “very difficult”, alluding to what he has described as China pursuing “unfair” international trade advantage.

Worries about escalating tensions between the world’s top-two economics may weigh on market-wide risk appetite if the tone of the meeting appears to be adversarial. In this scenario, Fed rate hike bets may sink alongside stock markets, which may hurt the US unit in the near term.