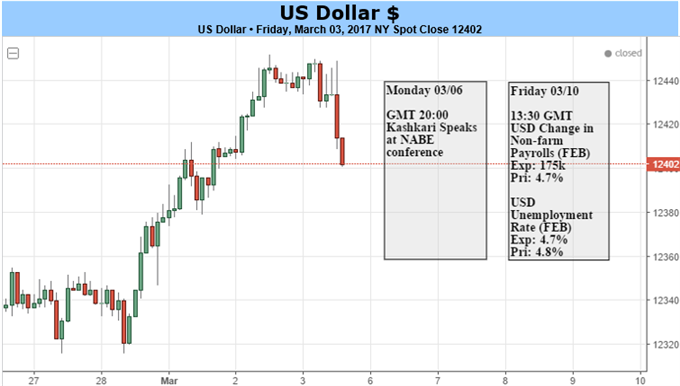 The Dollar’s posture heading into the new week is bullish on the back of a remarkably decisive outlook for a Fed hike at the next official FOMC meeting. According to Fed Fund futures, the market is pricing in a 94 percent probability of a 25 bps increase to the official range at the March 15th meeting. That compares to a far more restrained 40 percent chance afforded to such an outcome only a week before. Yet, despite this fundamental leverage; the Dollar (ICE Index) only rose 0.28 percent – with peak gains against the New Zealand Dollar of 2.4 percent all the way to a weekly loss against the Euro. This restraint from the Greenback in the face of exceptional fundamentals should trouble Dollar bulls. Further gains through the coming week will likely prove more difficult to muster while the sensitivity to troubles will find a more receptive crowd. With that, events like Friday’s NFPs look more risk than opportunity for bulls.

It is perhaps a little facile, but a market that does not respond positively to a significant improvement to its fundamental backdrop is bearish. That’s not to say that the market is in the process of tumbling nor is it inevitable; but it does suggest that there is an asymmetrical balance of opportunities. We find the Dollar in exactly this position. Looking ahead, the docket is relatively light for domineering event risk for US investors. At the very top of that short list is the February nonfarm payrolls (NFPS) due on Friday. That indicator has a direct line to rate speculation through years of speculative association via the ‘dual mandate’. What would we expect from a truly impressive outcome for this labor report? With the markets already assuming a hike, there is little more to squeeze from such an outcome.

In contrast to the limited scope for the ‘hawkish’ outcome from the payrolls; a disappointing net jobs report, slide in earnings or an unfavorable development in other peripheral but qualitative statistics could jeopardize the impending hike. It is also possible that an outcome deemed to be generally ‘in-line’ could see the market drift back. When speculative appetite is maxed out and momentum starts to flag – regardless of the fundamental reasoning – there is a contingent of the market that was preying on momentum that will cut before the tsunami (FOMC decision in this case) hits.

Another characteristic of the Dollar’s fundamental backdrop that poses greater risk than promise is the currency’s connection/dependency on speculative appetites. The implications of rate hikes is predicated on a stable financial backdrop but it also only confers value if traders are chasing higher returns. And, in current conditions, market participants are stretched in their ‘reach for yield’ as current returns are exceptionally thin. It is the inflow of ‘slow’ but deep capital looking for marginally higher returns that motivates speculators to jump ahead of the wave – arguably a self-fulfilling market development. This makes the bullish course setting even more fragile for the US currency. Should sentiment falter, it would not only cut the chances of a rate hike, it would undermine the reason the market has afforded the theme importance.

For general sentiment next week, it is important to appreciate that global monetary policy – between extreme accommodation for access to cheap funds to normalization as a showing of optimism for the economy – has proven an ineffective motivator. Far more prominent is the still vague outlook for global trade policy. This past week, US President Donald Trump revived his references to tax reform and a $1 trillion stimulus program at his address to the joint session of Congress. Mere mention of these programs in the past led to weeks’ long advance in capital markets for significant traction. The half-life and ultimate reach of this most recent update was a day and comparably limited. Keeping close tabs on the President’s social media accounts is advisable for those that want to maintain a cautious posture on the market.