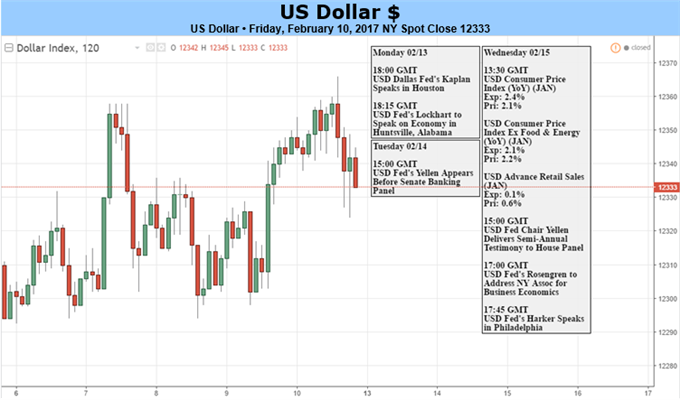 The Dollar was one of this past week’s best performers – and not just relative to other currencies. An ambitious rally from recent congestion was impressive, but its momentum is dubious. Motivation behind the drive was clear in unilateral improvement in US financial conditions via policy change. Yet, that particular price lever has been used liberally as of late, and its effectiveness will start to wane without tangible progress to offer speculators a foothold to carry the advance higher. In the week ahead, we have traditional economic data, updates for monetary policy standing and general risk trends. However, for various reasons all three of these themes will struggle for traction. Either we are delivered a dramatic surprise on these routine event risk, authorities spell out details which offers a policy advantage for the US or the climb in US markets (and currency) will quickly stall.

Taking stock of the event risk spread out through the coming week, there are listings for all of the most popular speculative themes of the past few months and years. That said, motivating the market here and now requires significant alterations to a particular fundamental theme. Over the past weeks, it has become rather clear that policy alterations are the least accounted-for risk moving forward and thereby the most capable of rendering significant movement in the Dollar and US assets. In the weeks that followed the US election in early November, market soared. This past week, the Dollar managed to break a significant bear trend. Motivation for both developments was founded from the same source: policy vows made by the new President.

Part of Donald Trump’s campaign was a vow to enact bold actions to charge economic activity. Commitments to sign a massive infrastructure-spending program and reduce taxes were seen as growth friendly programs that would be rushed through by a leader who had vowed rapid change. While some items in the open three weeks have been driven through by executive order and other means, there has been little traction on these key economic agendas. This past week, an update on the tax cuts and simplification program refreshed speculators’ appetites, but the Dollar run on the second go around is likely to be far more restrained than the first. Suggestion by the President and his administration that details would be supplied in two-to-three weeks means this markets will be left up to their own devices and valuations for some time.

In the meantime, the weight and effectiveness of the tax program, fiscal stimulus vow, border tax and other meaningful but singularly beneficial efforts will be evaluated by non-market entities this week. First up is the Federal Reserve’s interpretation of such commitments offered up by Chairwoman Janet Yellen at the semi-annual Humphrey-Hawkins testimony before congress. An evaluation of the domestic growth and global risks against trade barriers will represent critical insight for domestic assets, risk trends and even monetary policy expectations. In similar fashion, the Moody’s credit rating agency is set to evaluate the United States’ sovereign risk at the end of this week – consider this for weekend exposure. The Standard & Poor’s decision to cut the country’s top credit rating had global ramifications. While a follow up easing is unlikely, guidance can dramatically alter the scales.

Another event to keep close watch on is the two-day gathering of the G-20’s finance ministers. While this is subordinate to the mid-March leaders summit, the most remarkable talking points in next month’s meeting will be established at this gathering. Reflection on growing trade troubles – particularly through US threats – will no doubt be a key subjective. There will be plenty of standard event risk filling in the time around thee critical listings, but market movement will depend more on the degree of surprise and will naturally struggle for follow through. Fed speak and the January consumer inflation statistics will speak to a theme that was pushed to the backdrop. Capital flows (TIC) and housing statistics will not reach far enough. Without a strong push, the Dollar’s run will quickly start to struggle this week. – JK