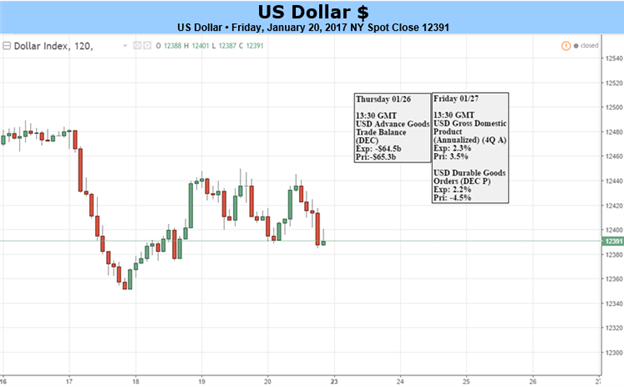 US Dollar at Risk as Traders Cut Exposure Amid Information Vacuum

Where will the US Dollar go in the first quarter of 2017? Get our forecast here!

A mostly thin economic calendar leaves the US Dollar to ponder the implications of a still-murky fiscal policy of newly-minted President Donald Trump in the week ahead. The promise of generous stimulus initially stoked bets on faster growth and inflation, sending shares higher alongside the greenback as investors foresaw richer earnings and a steeper Fed rate hike cycle. The absence of details has soured optimism however and the currency has been mostly on the defensive since the calendar turned to 2017.

Big-ticket fundamental news-flow does not enter the picture until Friday, when market participants will get their first look at fourth quarter US GDP figures. The annualized growth rate is expected to have slowed to 2.2 percent in the final three months of the year, down from 3.5 percent in the preceding period. Robust improvement in US data outcomes relative to consensus forecasts over the same period suggests analysts may be underestimating the economy’s vigor, opening the door for an upside surprise.

Under normal circumstances, such a result might’ve encouraged bets on a more hawkish Fed and sent the US currency upward. It seems unlikely that the central bank will do anything but wait until there is greater clarity about where the White House is steering however. Indeed, FOMC policymakers including Chair Yellen have consistently stressed that much for their outlook depends on the impact of whatever fiscal program Mr Trump pursues. This may mean that the GDP release loses much of its market-moving might.

This makes the US unit vulnerable to kneejerk volatility as markets jump from one headline to the next, attempting to divine direction. If price action so far this year is telling, investors faced with such a backdrop prefer to scale back exposure and wait for greater clarity from the sidelines before committing one way or another. With net speculative long USD exposure still at the highest in over a year (according to CFTC data), ample room for profit-taking remains. This hints that the path of least resistance leads downward.