US Dollar May Fall Further as Trump Inauguration Nears 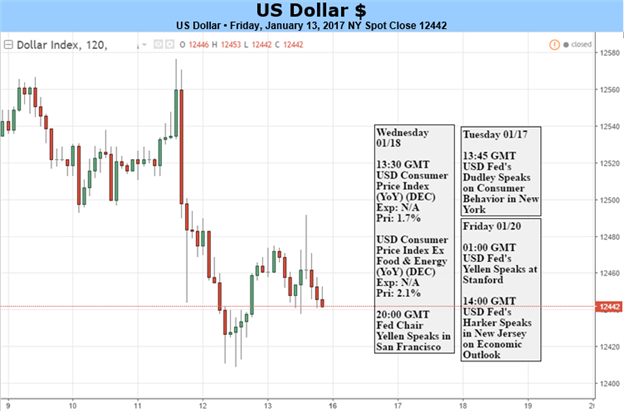 Where will the US Dollar go in the first quarter of 2017? Get our forecast here !

The US Dollar turned lower last week as the unwinding of the so-called “Trump trade” – a catch-all for the market gyrations following the US presidential election – resumed as expected. The greenback has been mostly on the defensive since the calendar turned to 2017, managing only a brief respite after data revealed an unexpectedly strong pickup in wage growth in December.

Going into the new year, the standby narrative envisioned accelerating growth and bubbling inflation powered by a hefty dose of fiscal stimulus championed by the President-elect. This would spur the Fed to adopt a steeper rate hike path. Not surprisingly, this proved to be overwhelmingly supportive for the greenback and pushed it to the highest level in 14 years.

Cooler heads returned as January began and optimism soured as markets questioned moves to relative extremes on the basis of a fiscal platform that was still largely unknown. Tellingly, investors were willing sellers of the US Dollar after the release of cautiously-worded minutes from December’s FOMC meeting but uninspired to buy it by a steady stream of hawkish comments a week later.

Traders’ disappointment with the absence of specifics in Mr Trump’s first press conference since July is likewise understandable within this context. It may deepen further still as anxiety about the murky path forward grows more urgent on approach to the Presidential inauguration on January 20. At this late hour, it would probably take a truly Herculean effort to counter all of the markets’ doubts before the oath is taken.

Fed Chair Janet Yellen is famously measured in her remarks and so is unlikely to ignite the spark of rate hike speculation with pair of speeches in California next week. Meanwhile, a pickup in headline CPI inflation would need to significantly exceed the projected acceleration to a core year-on rate of 2.2 percent to get the markets’ undivided attention.

On balance, this bodes ill for benchmark currency, at least in the near term. Fiscal policy aside, the Fed is still the only major central bank looking to meaningfully tighten and the late-2016 move may yet be shown as prescient. This points to a broadly upward trajectory for the US Dollar in the months ahead. It may be some time yet before this central tendency reasserts itself however.