Will the US Dollar Rise After a Fed Rate Hike? Maybe Not. 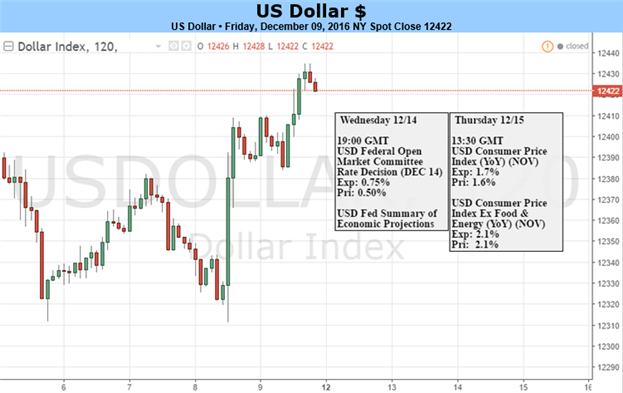 The outlook for US monetary policy returns to the spotlight in the week ahead as financial markets set their sights on the year’s final FOMC meeting. An interest rate hike seems all but assured: priced-in expectations implied in Fed Funds futures pricing imply traders put the probability of an increase at 100 percent.

Such confidence has persisted for some time, meaning the hike itself has probably lost its market-moving potential. Further, the markets expect two hikes in 2017. Despite the sharp steepening of the projected rate hike path after the US presidential election, this matches what the central bank itself foresaw in September.

Chair Yellen and company have probably learned their lesson from last year’s “liftoff” debacle. Then as now, Fed prepared investors for a hike well in advance. However, they then predicted four hikes for 2016, double the amount of tightening baked into market pricing. Not surprisingly, risk appetite collapsed.

The subsequent clean-up effort meant months of fine-tuning the Fed’s message that strained its credibility. Policymakers will almost certainly want to avoid a similar scenario this time around. That means they will likely stick with September’s outlook for the interest rate path.

The same seems likely for the official set of growth and inflation expectations. Extensive commentary from the Fed’s top brass over recent months drove home the message that much depends on what happens on the fiscal side of the equation. Since this remains murky, opting for a wait-and see approach seems prudent.

This leaves Yellen’s press conference following the announcement. Swaggering rhetoric and bold promises are typically not in the Fed Chair’s repertoire. She prefers to keep things vague and has become quite good at offering balanced remarks that don’t reveal too much to the prying public.

On balance, this amounts to a rate decision that will broadly endorse the status quo but offer little to propel the narrative. With little else up ahead before year-end, this could give a green light to profit-taking, pulling the greenback down from 13-year highs before the calendar flips to 2017.