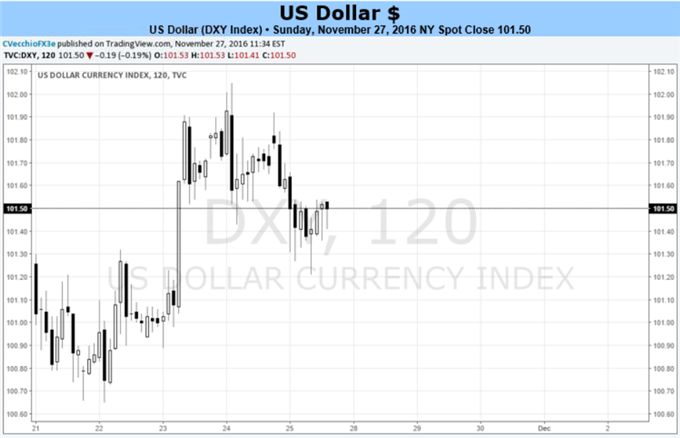 - Rate forecasts are fully pricing a December 14 hike, with Feds funds calling a 100% chance of a move.

- The speculative burden is now on February and beyond – the Fed’s expectations glide path.

- The US trade agenda under new president will compete with Fed rate forecasting and strength in counterpart weakness.

Though the ICE Dollar Index (DXY) closed out this past week at its highest level in over 13 years, there was a notable downshift in bullish momentum. Following the strongest two-week rally since the currency topped out in early 2015, the benchmark currency barely eked out a bullish close through a period restrained by holiday liquidity. The currency’s primary effective driver – Fed rate forecasts – has enjoyed a remarkable run but is quickly burning off its fuel. Can the expectation of 2017 rate hikes pick up the responsibility for further Dollar gains? Will the threat of US trade barriers take over the responsibility of lifting the speculative value of the Dollar at the detriment of its largest trade partners? The bullish course is not particularly easy to chart ahead.

This past week, the Dollar managed its third straight positive close; but the gains were far less material than what was achieved in the two weeks immediately following the US Presidential election. This was not simply a flush of optimism following the outcome of the closely watched vote, but it nevertheless supplied the kind of fuel that the Dollar has been able gain considerable traction on. The problem is that these outlets of strength may be tapped without direct – rather than incidental – support. The most prominent bullish engine at risk of spent conviction is the rapid buildup of interest rate speculation.

As of this past week, the market is affording a 100 percent probability that the Federal Reserve hikes at its next meeting on December 14th. We haven’t seen this degree of certainty since the last hawkish policy cycle. In an environment where most are maintaining zero or negative rate policies alongside ever-expanding quantitative easing programs, this unusual tack is a strong fundamental booster. Yet, you can’t push expectations beyond 100 percent. Well, in fact, you can push yield forecasts above that traditional cap in certitude because speculation can go out to a move beyond 25 basis points. That is extremely unlikely however as the group has vowed a gradual pace so as to curb fears as they attempt to normalize policy. Where further bullish premium may be found is through tightening at further meetings.

According to the same futures contracts, the market is pricing out a meager 10 percent chance that the Fed would hike in December and act again at the first gather in 2017 (February 1st). Accelerating the Fed’s timetable would be exceptionally difficult to motivate. That said, it is still possible. The data listings on tap for the coming week are the high-profile that could accomplish just that if they provided an unexpectedly robust outcome…though they could also torpedo current forecasts with surprisingly weak outcomes.

Top billing for event risk this coming week is the November NFPs and broader labor statistics. The net job change is the speculative rank’s first concern. If the number can tap a deeper risk response, it may carry a lasting Dollar move. More likely, the print will be capable of a jolt at best with lasting motivations reserved for the underlying statistics closer to the Fed’s mandate. The jobless rate is already far along. It is the wage growth clip that the FOMC has mentioned in minutes and amongst individual members for lacking the credibility to support a follow up to December 2015’s liftoff. Before the employment statistics cross the wires, the Conference Board’s consumer sentiment survey and the PCE deflator will offer insight into a more unstable backdrop for the group and currency.

While the economic docket lays direct track for us to follow for possible volatility flare ups, Dollar traders should also be intimately aware of the influence that rising protectionist agenda has for the currency and global investment landscape. The Brexit vote, US Presidential election, competitive monetary policy regimes are all product of countries attempting to benefit at their global counterparts’ detriment. There are initial gains to be had for those pursuing barriers to and withdrawal from global trade; but they are short lived. In the first phase, few countries stand to benefit more than the world’s largest consumer nation. However, the net loss for the global economy in diminished trade, investment and growth will come back to hit that largest player. The question is: what phase are in for these big picture fundamental themes? I believe we aren’t as early as many seem to be treating the Dollar. –JK