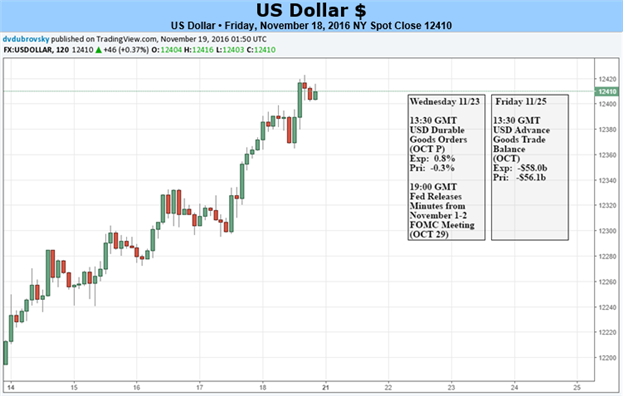 The Dollar’s performance these past weeks is undeniably extraordinary. Through this past Friday’s close, the ICE’s Dollar Index (DXY) notched 10 consecutive days of climb – the longest bull run since June 2013 – to reach highs not seen in over 13 years. With gains won versus its most liquid counterparts to the highest yielding emerging market currencies, the strength looks unassailable. However, the gains will not carry on unchallenged. The Dollar’s advance has been fueled less on high expectations for its own outlook and is more so the result of a general razing of everything around it. That relative appeal can only confer so much value before mutual limitation attracts unwanted attention from a leery speculative market. It is likely that we are near that tipping point, and the expected liquidity drain will make focus the skepticism.

Historically, the Thanksgiving holiday in the US drains the market of liquidity and further lifts the assumptions of holiday performance. On a statistical basis, the S&P 500 experiences one of its best months of performance of the calendar year through November (over three decades of analysis). Whether that is happenstance, holiday cheer or a more prosaic capital market event (speculative rotation); it is a norm that many investors rely upon. That presumption is dangerous for market participants in both capital markets and the Dollar though. A cautious trader should always approach the markets as if ‘this time is different’ so that well-established analysis is the foundation for trades rather than the hope of routine. In this particular year, this caution is even more necessary.

From a purely speculative position, the Dollar currently aligns itself to speculative appetite rather than pines for the panic that would leverage its safe haven status. A move for US equity benchmarks back to record highs and the simultaneous advance for the local currency reflects the relationship in play: a regional preference either based on growth or return. The charge following the US election offers some promise of higher returns. President-elect Donald Trump has suggested that fiscal stimulus could be unleashed with hopes of a swell that could compensate for the faded charge in monetary policy. Yet, the other side of this coin is the rise of protectionism. While that may prove beneficial to the country erecting barriers in the outset, it will eventually lead to mutual and aggregate loss for the world.

It is difficult to say when the benefits of a closed system will be overtaken by its detriments, but the environment can carry a lot of weight in this equation. As it stands, the market is already stretched on good will. Markets have seen record highs on the foundation of monetary policy-fueled reach for yield in a world that provide little natural return. Such exposure has already made the markets queasy with even the diehard bulls dubious of how much further things can run without a proper rebalancing of value to price. We have seen over the past few years that fears for the naturally risky regions of the world – like Emerging Markets – has sent a jolt of panic through the US and developed world. With protectionism threatening these weak links, it wouldn’t take much to trigger fear.

While the bearings on sentiment and the Dollar’s role in the spectrum can be debated, there is little doubt that rate speculation has been a straight forward contribution to its performance. Expectations of a rate hike before the end of the year has climbed steadily and now stands at 100 percent according to Fed Fund futures. There is good fundamental evidence to support this through Fed guidance and the evolution of data; but at this degree of expectation, there is little further value to be conferred on the currency. With a hike already priced in, we are not going to see expectations of a faster pace of tightening much less a 50 bps move. Alternatively, if volatility were to rise in the capital markets; a repeat of the summers of 2015 and 2016 where the Fed decided to defer in order to avoid unsettling the markets would be very likely. This does not pose a particularly promising set of scenarios – restrained and difficult bullish continuation against a volatile and easy to spark correction. And, while quiet can offer relief from pain; it can also cool runaway optimism enough to let the troubles show through.